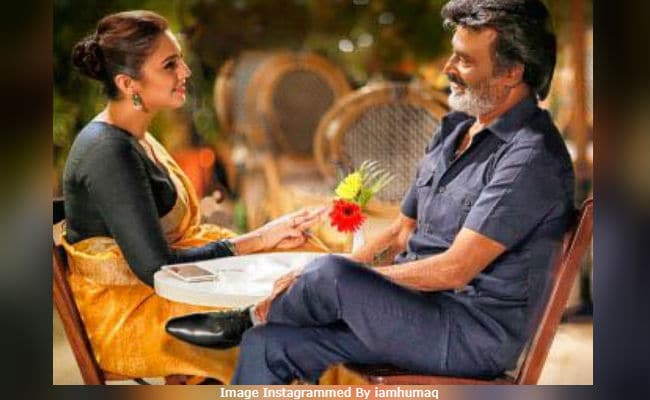 New Delhi: The trailer of superstar Rajinikanth's much-awaited film Kaala released on Monday evening and as expected, it instantly went viral. Rajinikanth plays the mob boss Kaala Karikaala or the 'King of Dharavi' in the film. He co-stars with Nana Patekar and Huma Qureshi and the trailer gave a brief introduction to all the characters. Of the viral Kaala trailer, Huma told news agency IANS, "I am happy with the trailer being so loved and it is being shared. It is trending at number one. As an actor, you feel very happy that your work is being appreciated. I am just very grateful." In just a day, Kaala trailer has got close to 4 million views.

As a part of promotions, team Kaala also came out with an unique strategy - the film got an emoji on Twitter. "The emoji appears next to the hashtag in the Tweet and is inspired by Rajinikanth's character from Kaala. The emoji will be active until after the movie launch, till June 10," a statement released by the team revealed.

Kaala is primarily shot in Mumbai's Dharavi, which is s believed to be one of the biggest slum in Asia. While Rajinikanth is the mob boss, Nana Patekar features as the prime antagonist. "Nana Patekar has done a great job. I was thrilled by his performance and thoroughly enjoyed it," Rajinikanth had earlier told PTI.

Meanwhile, the Kannada film industry has decided not to screen Rajinikanth's Kaala in theatres because of his stand on the ongoing Cauvery water row, IANS reported.

Promoted
Listen to the latest songs, only on JioSaavn.com
Directed by Pa Ranjith and produced by Dhanush (Rajinkanth's son-in-law), Kaala hits the screens on June 7. Anjali Patil, Samuthirakani and Pankaj Tripathi are also part of the film.