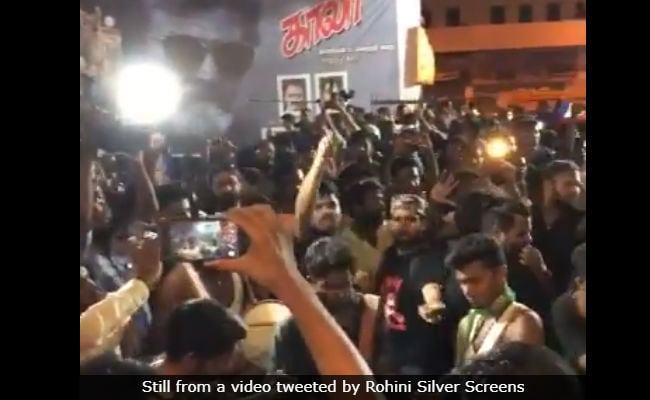 Fans celebrating the release of Kaala outside a theatre in Chennai. (Image courtesy: Twitter)

New Delhi: Fans of Rajinikanth all over the world are excited about the return of the superstar on the silver screen today as Kaala opened in theatres to packed shows early Thursday morning. Videos of fans brimming with joy, bursting crackers and dancing to their hearts content (inside and outside the theatres) are all over the Internet. Like most of the times during Rajinikanth's film release, people from Japan and other parts of the country joined the Indian fans to celebrate yet another film, where Thalaiva (as fans lovingly call Rajinikanth) takes the centrestage. Movie theatres are decked up with grand posters and hoardings of Rajinikanth's film and it's no less than a festival for fans of Rajinikanth worldwide today. Many call it a Diwali for them today.

This is a scene from outside a theatre in Chennai at 4.15 am on Thursday morning. Fans yelling and cheering for Rajinikanth - some wearing customized Kaala t-shirts.

This is not INDIA
This is FRANCE#Kaala Premiere Celebration
Get ready for the Marana Mass
Therikka Viduvom@MegaCGRepinay#KaalaFrance#KaalatheRageofRajinikanthpic.twitter.com/v2Hd1i0CXk

No wonder Kaala earned Rs 230 crore in pre-release business. Rajinikanth's massive fan base ensured that the theatrical and music rights of the film (in all languages) worldwide sold over Rs 230 crore, stated a report in Hindustan Times. If the film collects Rs 280 crore more then it will secure a position on the list of 2018's commercial hit films.

Meanwhile, the dark clouds for Kaala in Karnataka haven't subsided entirely. Despite the Supreme Court's ruling in the favour of the film's release in Karnataka, pro-Kannada groups have threatened to disrupt screenings in the state. Upset with Rajinikanth's statement over the Cauvery row, a Karnataka film body banned the release of the film earlier this month. On the eve of the film's release Rajinikanth requested the outfits to not disturb the screening. "I have not done any mistake. Please do not disturb those who want to watch the movie. I request your cooperation," he said in Kannada, reports news agency PTI.

Promoted
Listen to the latest songs, only on JioSaavn.com
Kaala is set against the backdrop of Mumbai's Dharavi slum. The film directed by Pa Ranjith also stars Nana Patekar and Huma Qureshi. Kaala is produced by Rajinikanth's son-in-law Dhanush.