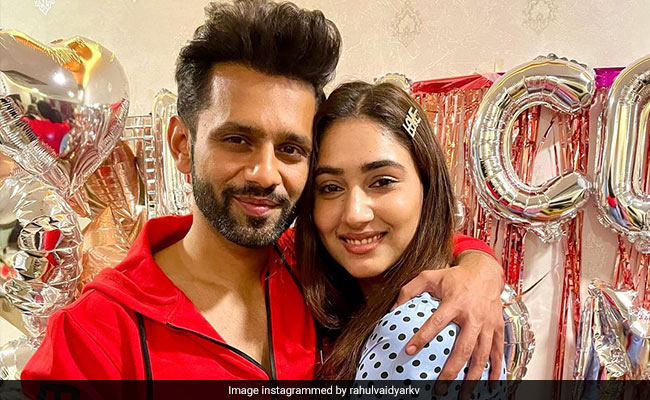 All of us know that singer Rahul Vaidya is head over heels in love with his girlfriend, actress Disha Parmar. The singer keeps expressing his love for Disha through his social media posts. Recently, Rahul Vaidya dropped a comment on Bollywood actress Disha Patani's post and appreciated her but he could not do that without also praising Disha Parmar. Disha Patani had shared a picture of herself on Instagram, on Wednesday evening. In the picture, Disha Patani could be seen posing in a stunning lacy bodysuit. Admiring the actress' post, Rahul Vaidya wrote: "DISHA naam mein hi kuch khaas baat hai." He also tagged Disha Parmar in his comment.

Rahul Vaidya's comment on Disha Patani's post received a lot of reactions from his fans. Some lauded him for his smartness while others expressed how much they admire him and Disha Parmar. "You are the most cutest person ever," a fan commented.

Besides being a singer, Rahul Vaidya has also been a contestant of the reality show Bigg Boss 14. It was during one of the episodes of the show that Rahul proposed to Disha for marriage. Rahul was the first runner up of the show.

Take a look at Disha and Rahul's Gudi Padwa celebrations:

Last week a picture of the couple dressed as bride and groom went viral on the social media. It led to speculations that the couple got married but it was later revealed that the picture was a still from Rahul Vaidya's upcoming music video Madhanya.

Rahul Vaidya and Disha Parmar co-starred in a music video Yaad Teri. It was released in 2019. While Rahul is known for participating in singing reality show Indian Idol, Disha Parmar has starred in several TV shows like Pyaar Ka Dard Hai, Who Apna Sa and Saraswatichandra.