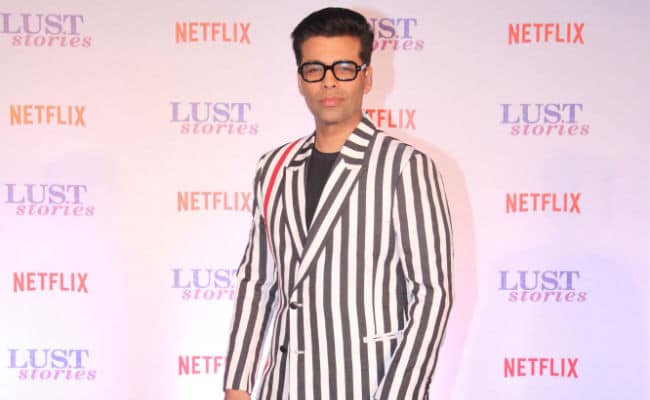 New Delhi: Anthology film Lust Stories, in which Karan Johar is one of the four directors, is all set to release on June 15 but the 45-year-old filmmaker said that it cannot compete with Race 3, starring Salman Khan, which also hits the screens on the same day. At an event to launch the trailer of Lust Stories, Karan Johar was asked if Lust Stories could overpower Race 3, the filmmaker said, "Of course not. Salman Khan is on a different platform. He is the big master of mainstream cinema. We don't have that ability to fight with Salman or Race 3. We are actually very happy four filmmakers who have made a tiny little film for which we are grateful to Netflix."IANS quoted him as saying.

Karan Johar also said that Race 3, directed by Remo D'Souza, is going to be a humongous film. "It's a franchise film and its totally different film into totally different syntax. We are not competing with him," he said at the event.

Race 3 is also scheduled to hit the screens on June 15 and ahs an ensemble cast. The film's trailer has already created a buzz on the Internet. Apart from Salman Khan, the action-thriller features Jacqueline Fernandez, Anil Kapoor, Bobby Deol, Daisy Shah and Saqib Saleem. This time the movie will be directed by Remo D'Souza instead of Abbas-Mastan. At the trailer launch of Race 3, Salman Khan revealed that he had asked for certain changes in the script to make it more appealing. He said, "Race 3 script was offered to me two years ago but I didn't think I fit in the genre. I asked Ramesh Taurani to make some changes because I didn't fit in that genre. Once that was done, I thought it would be actually a lot of fun to do this film."

Meanwhile, we know one person who will buy a ticket for Race 3on June 15 and that's Karan Johar, he said so at the event on Friday night.