Race 3: Salman Khan Says Action Should Look Realistic, So They 'Blew Up Pretty Much Everything' 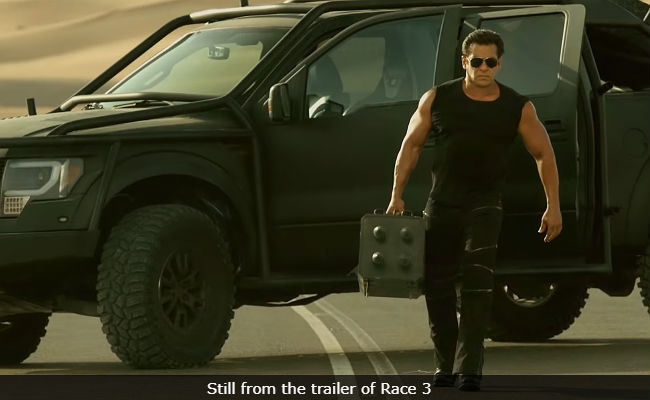 New Delhi: Race 3, releasing in nine days, promises state-of-the-art action sequences and Salman Khan, who headlines the cast of the Remo D'Souza-directed film, revealed how they kept the action sequences realistic. Salman said that there are not many special effects in the film and that "blew up pretty much (everything) that they bought." Salman Khan told reporters in a group interview: "All the action in the film is not dinky cars, or special effects blowing up, we blew up pretty much that we bought. It is very real and all the cars too. They aren't special effect cars, these are the cars we bought."

Salman Khan said that Hollywood stunt choreographer Tom Struthers, who was a part of the action designs team, was impressed. Salman said: "Tom Struthers is the guy who had done action for Tiger Zinda Hai but he's also done action for Christopher Nolan films like Dunkirk and the Batman series. While we were shooting, they saw it and said, 'We've shot for so many blockbusters, but we have never seen somebody go ahead and destroy these many cars'."

When asked why the team chose to blow up real cars instead of adding special effects, Salman Khan explained: "It's tricky (to get the action right). Sometimes, you go overboard and when you go realistic, they (audience) prefer the earlier films' action... So we needed to be careful. Action has to look genuine, believable. It can't look farcical and we can't make you laugh. Physically also, it's a lot of strain and hard work. If you don't look the part, physically and end up doing unbelievable action, then people laugh at you."

Salman Khan also talked about the action sequences done right by his Race 3 co-stars Jacqueline Fernandez and Daisy Shah. "The kicks they have given are lethal. They have really, really trained for it. Both of them - stretching and kicking and all that stuff. They have done that. It looks like two men fighting and it also has its humour and slight sensuousness. It can't be this hardcore action, so it has everything," Salman added.

Race 3 is a reboot of the Race series, the face of which was Saif Ali Khan. When asked what's new in this film, Salman Khan said: "This part of Race is slightly different to the earlier two ones. It is 'Race' with Hum Aapke Hai Koun...! This guy is very sharp, has humour, is ruthless and he has suppressed all his emotions so you don't know who this man is till the end of the film."