Raazi: Alia Bhatt's Transformation From A 'Tomboy' To A Spy-Wife 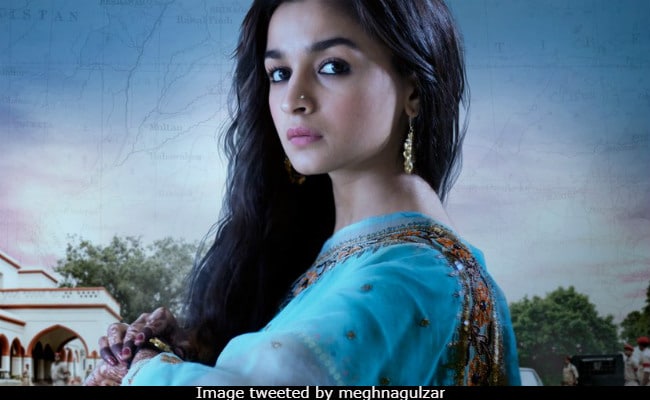 Alia Bhatt in a poster of Raazi (courtesy meghnagulzar)

New Delhi: How many of you were left impressed by the trailer of Alia Bhatt's Raazi? Must have been all of you, we guess. Earlier this month, Alia stunned us as she brilliantly got into the skin of Sehmat - a young Indian who is planted in Pakistan as a spy. Now, director Meghna Gulzar opens up about Alia's transformation from her "tomboyish" self to the gentle Sehmat (the character she plays) in an interview to mid-day. Taking about prepping Alia for the role of a spy wife, Meghna said: "Her body language was another thing we had to work on. She is tomboyish, almost to the point of being clumsy where she would stumble frequently," reported mid-day.

"In the film, she was supposed to play this woman who is feminine and dressed in flowy fabrics, yet do the things she was supposed to do which aren't feminine [in the conventional sense]." Set in 1971, Raazi is the story of Sehmat who is married to a Pakistani army officer named Iqbal (played by Vicky Kaushal) and asked to transfer intel to India.

She is a Wife.
Ardent.
Affectionate. #ShadesofRaazi#Raazi@aliaa08@vickykaushal09@vineetjaintimes@karanjohar@apoorvamehta18@JungleePictures@DharmaMovies@RaaziHoonpic.twitter.com/G0ekG89CYH

Talking about the jargon of the movie, the director told mid-day: "Language was a huge part of her preparation. We no longer speak the way we did back then - there was a certain amount of thehrav in the way people communicated. Speaking refined Hindi and Hindustani was essential for the part. I gave her movies and short films to watch, for reference."

When asked if Alia Bhatt was the best choice for the role, Meghna Gulzar said she had Alia in mind while formulating the script of the movie and that Alia jumped on board after just a brief narration. "Even before we had put down a single word on paper, we knew it was her. This is also the first time in her career that Alia agreed to do a film where the script wasn't ready," she told mid-day.

Raazi is all set to hit screens on May 11. Apart from Raazi, the 25-year-old actress also has Gully Boy and Brahmastra in her line-up.
Comments
alia bhattraazi