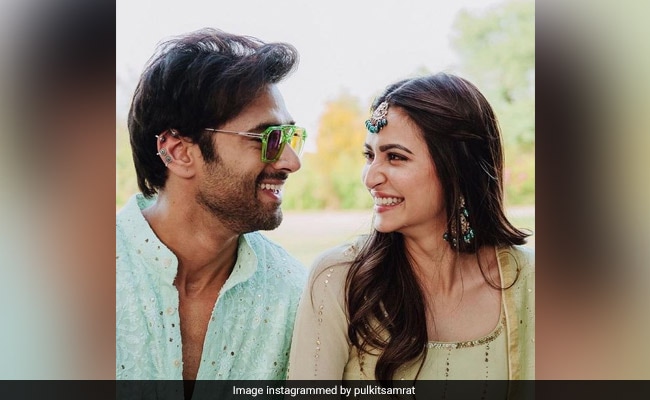 Pulkit Samrat can't have enough of Kriti Kharbanda's smile. Love is surely in the air for this Bollywood couple and they can't help cherishing this once in a while. The duo openly expresses their love for each other on social media and their fans are having a nice time eyeing the two in a throwback photo shared by Pulkit on Instagram. The picture shows the two gazing into each other's eyes and sharing a warm laugh. Pulkit Samrat has his funky green-framed glasses on while Kriti looks gorgeous in dangler earrings and maang tikka. We can't miss the mushy vibes between this couple who chose to colour-code their ethnic attire into hues of green. Pulkit captioned the post with a green heart emoji.

The photo is from their Holi celebrations that took place earlier this year. Pulkit had shared pictures from this event in March, where they were seen cuddling and smiling with joy. The two were surely finding it difficult to not do the cute PDA in front of the camera. Needless to say, fans loved them adoring each other openly.

Kriti had also shared a snippet from this event on Instagram and captioned it, “Mera[Mine]” with a red heart emoji. We won't deny that the festivity of colours added more hues to the couple's season of love and adoration.

Back then, Pulkit had shared another video from the Holi celebration where the couple is seen smearing colour on each other's cheeks among other friends. This was a more casual occasion where the duo picked black trousers and white tees. “Happy Holi,” read the caption.

Does that mean the couple doesn't have their funky times? Here, take a look at how the two had a face-mask party with friends and Pulkit isn't the person to shy away from posting such fun memories on his socials.

Pulkit will be next seen in the third installment of Fukrey.