Here's How Pulkit Samrat Is Gearing Up For Fukrey 3

Pulkit Samrat is prepping hard for his upcoming film Fukrey 3 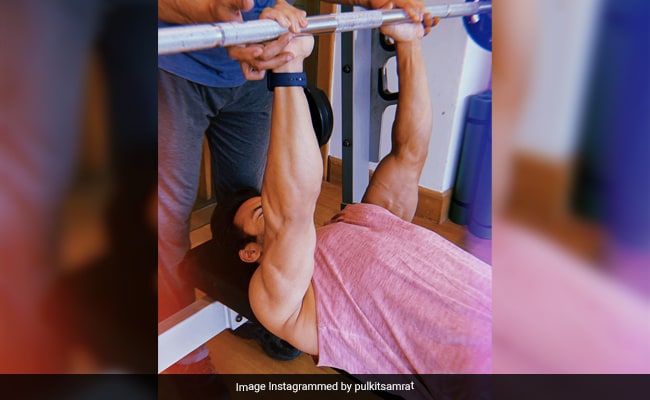 Actor Pulkit Samrat, who was last seen in the ZEE 5 film Taish (2020), has just "two weeks" to transform his body. Reason is his upcoming movie Fukrey 3. Pulkit is prepping hard to "get lean" for his role in the third installment of the franchise and his Instagram post says it all. The Fukrey actor posted a sneak-peek of his workout session on the platform and shared that he has "to be ready for Fukrey 3 within 2 weeks". In the picture, Pulkit can be seen resting on a bench and is lifting weight as his gym trainer supports him in balancing the rod.

Pulkit wore a pink sleeveless T-shirt in his workout session. His face is slightly visible on the left. He wrote, "On to my shredding cycle. Got to be ready for #Fukrey3 within 2 weeks. Gonna be an interesting challenge for my hustle buddy @sameerhansari!"

Pulkit Samrat will also be seen in an upcoming trilingual film Haathi Mere Saathi. He had recently announced on Instagram that the movie has been postponed till further developments due to the rising cases of Covid-19 in northern parts of India. However, it has been released in South-Indian markets on March 26 as Aranya and Kadaan in Telugu and Tamil versions respectively.

He reposted Eros Now's Instagram update and wrote, "Haathi Mere Saathi Release Update -Dear viewers, It pains us to share this news but given the Covid-19 situation in the Hindi markets, the team of Haathi Mere Saathi has decided to hold on to the release of the film. We shall keep you posted on further developments. However, we will be releasing Aranya and Kaadan in the South markets on the 26th of March."

Coming back to Fukrey 3, Pulkit earlier shared that he is "super excited" about the upcoming film. In an interview to PTI last year, the actor had said, "The script is done and we had a narration. We are all super excited to go on floors. We will start the shooting early next year."

Pulkit Samrat made his debut with Bittoo Boss in 2012. The actor then worked in the Mrighdeep Singh Lamba's 2013 film Fukrey, in which he played the lead role of Hunny Gulati. The second installment of the Fukrey franchise titled Fukrey Returns was released in 2017 in which he reprised his role. The Fukrey series also featured Varun Sharma, Richa Chaddha, Ali Fazal, Manjot Singh and Pankaj Tripathi. Fukrey 3 will feature all of them.

Pulkit has also worked in films like Jai Ho, O Teri, Dolly Ki Doli, Sanam Re and Pagalpanti. His last release was Taish.