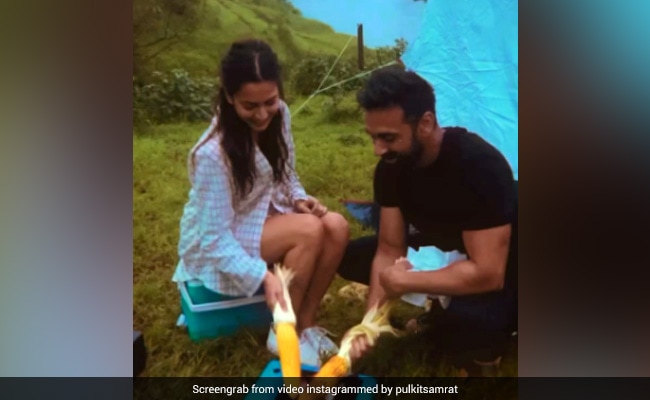 After being shut in for a long time in our homes, we all are craving to go outdoors and have some fun. Actor Pulkit Samrat must have felt the same, for he has already hit the hills. Camping is on his mind and he is not alone in his plans. In the video on his Instagram page, Pulkit is seen up in the hills, squatting beside his girlfriend, actress Kriti Kharbanda. The cute couple is busy roasting corn over a portable stove while sharing the joy of the moment with each other. Their smiles are melting our hearts, and so is the setting. Behind them, we see a tent and a distant river meandering through the hills. Pulkit wrote in his caption, "Camping vibes" and added pink hearts to it.  We feel the vibes quite strongly and it is getting irresistible for us.

Kriti Kharbanda also shared the video on her Instagram profile and wrote, "Barish, bhutta aur hum (Rains, corn and us)." She added a red heart and tagged Pulkit on it. Pulkit's Stories shows more friends who have accompanied the couple on this trip.

A few weeks ago, Pulkit  found his way up another hillside. In his photos, all we saw is greenery and a happy Pulkit walking up the earthen path. That was his way of spreading some "Sunday vibes," as he mentioned in his caption.

However, Pulkit's outdoor trips do not always have to be in the hills. Sometimes it's just a relaxing walk with his pet husky, whom he calls "Drogo Husky", outside the house in the locality. The actor loves his pet so much that he has an Instagram account for it. Compared to that, a morning walk is the least that the master can do for the dog.

When he is not outdoors, Pulkit loves to spend his time with workouts. The actor is serious about his exercises and his shapely abs give him away. He also believes in improving "one day at a time." In one of his photos, the actor is seen lifting a weight bar. For the caption, he wrote, "One day at a time. Be mindful when you work out. That's one big key to results!"

He is a balance of workout and chill as we read the caption of another photo. "Wake. Workout. Work. Chill. Sleep. Repeat. That's the perfect circle," it read.

His camping trip is perhaps just a part of that circle. Let us know what you think.

Gauri Khan To NDTV On What Diwali At Mannat Looks Like