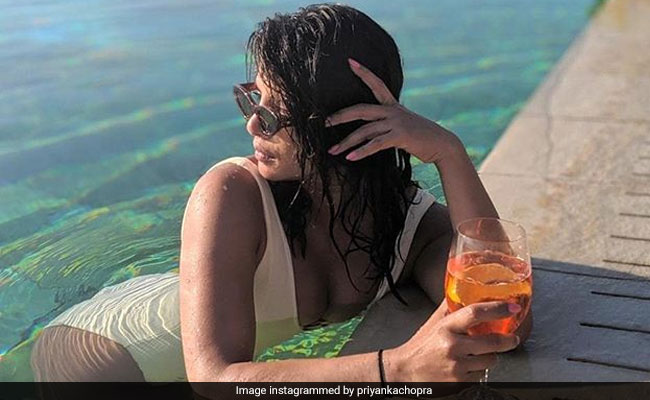 Priyanka Chopra and Nick Jonas are making us so, so jealous with updates from their Italian retreat. After attending Sophie Turner and Joe Jonas' wedding in France, Nick and Priyanka are unwinding at Tuscany and the 36-year-old actress, by her own admission, confessed that she's discovered "the best use of a vacation" and added: "The hubby taking pictures. LOL." Priyanka filled up her Instagram with an album of pool photos, in which she can be seen soaking up the Tuscany sun in an off white swimsuit. Priyanka poses with what appears to be a Bellini - her favourite drink in the world.

Priyanka Chopra knows just how to make us feel bad on a Monday - take a look at her Instagram post here:

Best use of a vacation. The hubby taking pictures. Lol @nickjonas

Looks like Nick Jonas' photography skills are pretty much brushed up as he gave us this shot of Priyanka enjoying a view of the Tuscan lush lands.

Under the Tuscan #teampixel : @nickjonas

When in Italy, Nick Jonas and Priyanka Chopra spent lazy evenings slow dancing on the Tuscan fields. It was a date night we suppose - Priyanka was stunning in a short black dress while Nick was his usual casual self. The sunset and the romantic melody made it all a dreamy affair.

Priyanka Chopra and Nick Jonas also literally cooked up a storm on their "date night cooking extravaganza" and posted ROFL photos of them posing with never-ending pasta sheets.

Priyanka and Nick began their Tuscany holiday diaries with a walk along the Via Dell Amore.

Ahead of their vacation, the couple were pre-occupied at the wedding of Joe Jonas and Sophie Turner. Joe and Sophie married in France over the weekend after their impromptu Las Vegas wedding in May.