Priyanka Chopra and Nick Jonas are chilling in Italy after the Jophie wedding. 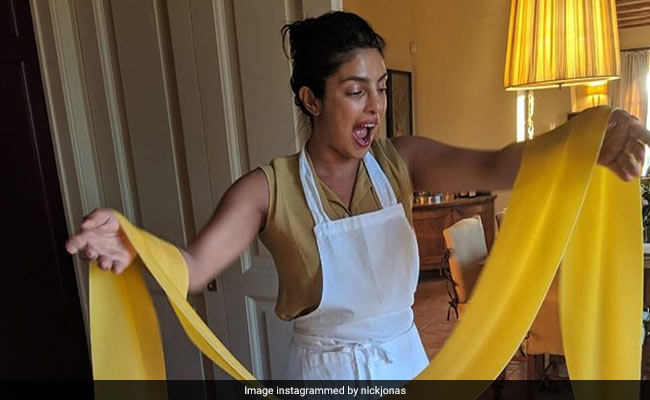 Priyanka Chopra is having a gala time with her husband Nick Jonas in Italy and their latest adventure in Tuscany was 'date night cooking extravaganza.' Nick Jonas shared pictures and videos from their date night, during which Priyanka and Nick made pasta (mind you, many forms of pasta) from the scratch - by flattening the dough and cutting them in various shapes - tortellini and spaghetti. In one of the videos, Priyanka Chopra can be seen stirring the pasta sauce under the watchful eyes of a chef. Nick Jonas tried his luck with cooking too.

Before posting updates from their date night, Nick Jonas shared a picture from their touristy outing to Via Dell Amore (The Way of Love in English), a pedestrian street with a picturesque view.

Priyanka Chopra and Nick Jonas jetted off to Italy after spending the weekend celebrating Nick's brother Joe Jonas' wedding to Sophie Turner. Joe and Sophie got married in France over the weekend after their impromptu Las Vegas wedding in May. Priyanka and Nick attended all of Joe and Sophie's wedding ceremonies including the Parisian cruise party and their rehearsal dinner, for which the rest of the family has also arrived.

On the work front, Priyanka Chopra is awaiting the release of The Sky Is Pink while she's soon to start her project with Mindy Kaling. Nick Jonas will take off for a multi-city 'Happiness Begins' tour with his brothers Joe and Kevin.