"All I think about is the little one," said Madhu Chopra 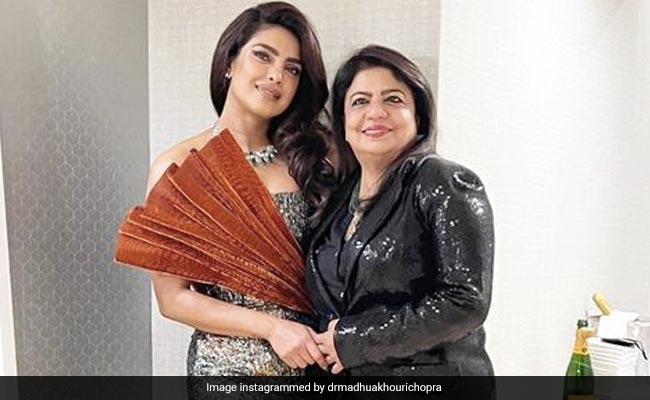 Global actress Priyanka Chopra and her husband Nick Jonas welcomed their first child via surrogacy in January this year. The couple surprised everyone with the announcement of the arrival of their first child on their respective Instagram handles. Since then, the couple has not shared any picture or name of the little one with their fans. However, now Priyanka's mother, Madhu Chopra, revealed that even she hasn't met her grandchild. Yes, in a live session with ETimes Lifestyle, on Thursday, she said that given the baby's health concerns and the COVID-19 situation, she hasn't been able to visit her daughter. Priyanka and Nick are currently in Los Angeles since the birth of their baby.

"I haven't seen her. I am here and she is in LA. We do Facetime once in a while. I think she is happy and joyous. This is all I can say for now. But maybe when I go and meet her in the middle of the year, I will be able to answer this better," Times of India quoted Madhu Copra.

Priyanka Chopra and Nick Jonas didn't reveal the gender of the baby, but a couple of days after the announcement, Priyanka's cousin Meera Chopra confirmed that the couple welcomed a girl.

In the interview, Madhu Chopra expressed her excitement and said that she has been waiting for something like this to happen for a long time. She added that the feeling of being a grandmother is unexplainable, and can't stop thinking about her grandkid.

"It's so joyful! I can't tell you how my heart just goes...I think it's something that I have been waiting for a very long time. It has happened now and I cannot conceal my happiness. I don't even remember Priyanka and my son anymore. All I think about is the little one," she said.

Madhu Chopra also revealed if we can expect Priyanka Chopra and Nick Jonas with their baby anytime soon and said, "I am always hoping (laughs) Never say never. It's her country, she could come."

Priyanka Chopra and Nick Jonas recently celebrated Holi at their LA's house. Reportedly, the couple didn't travel owing to their baby, who is only two months old. Sharing the pictures of the Holi celebration, Priyanka captioned it, "Do me a favor.. let's play holi. Sorry. Had to! #holihai"

Meanwhile, on the work front, Priyanka Chopra was last seen in The Matrix Resurrections. Next, she will be seen in Jee Le Zaraa, Citadel and Ending Things.