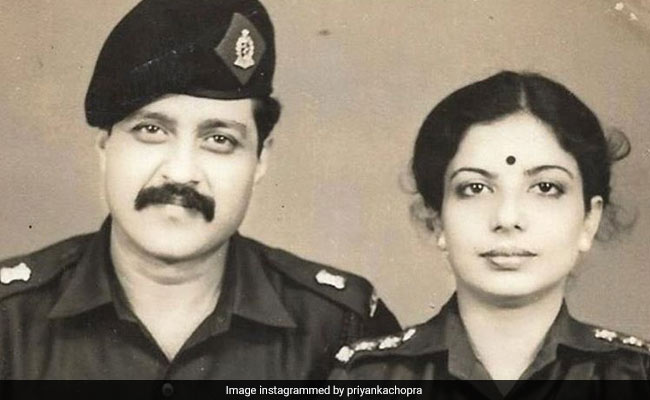 Priyanka Chopra, who is currently in Los Angeles (USA) with her husband Nick Jonas, shared a post on Memorial Day on her Instagram profile. The 37-year-old actress shared a throwback picture of her late father Ashok Chopra and her mother Dr Madhu Chopra (both served in the Indian army). Priyanka Chopra wrote in her caption: "Both my parents served in the Indian Army... Maybe that's why I feel such a kinship with military families all over the world. Today let's think of all the fallen heroes that have given their lives in service to protect our freedom. Memorial Day." In the comments section, Priyanka's cousin and Bollywood actress Parineeti Chopra wrote: "Badi mumma and bade papa's best photo." Comedian Russel Peters commented, "My family too." VJ Anusha Dandekar, Esha Gupta, Hina Khan and other celebrities flooded the comments section with heart emoticons.

Both my parents served in the Indian Army... and maybe that's why I feel such a kinship with military families all over the world. Today let's think of all the fallen heroes that have given their lives in service to protect our freedom. #memorialday @madhumalati #LtcolAshokChopra

Madhu Chopra co-owns the production house Purple Pebble Pictures along with Priyanka, as a part of which they have produced regional films such as Ventilator, Kaay Re Rascala, Pahuna, Sarvann and Paani among others. Paani won the National Film Award for Best Film on Environment Conservation/Preservation in 2019.

Priyanka Chopra will next be seen in Netflix's adaptation of The White Tiger, co-starring Rajkummar Rao. She also has the superhero film We Can Be Heroes and a film with comedian Mindy Kaling. She has also signed Amazon's web-series Citadel. The actress also announced the Sangeet Project with Amazon Prime. Priyanka's last theatrical release was The Sky Is Pink with Farhan Akhtar and Zaira Wasim.