The Internet Is Struck By Priyanka Chopra's Paris Glam. Harnaaz Sandhu And Others Left Comments

Priyanka Chopra is in Paris to attend an event hosted by Italian luxury brand, Bulgari 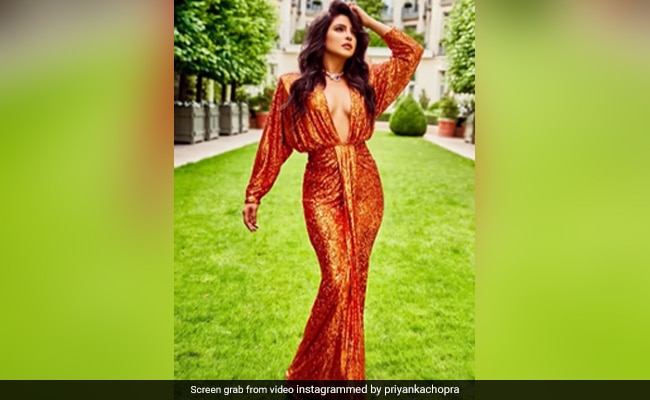 Priyanka Chopra is a superstar in the true sense of the term. The multi-hyphenate, who is one of the biggest names in Bollywood, has made a mark for herself in Hollywood as well. Therefore, it is no surprise that the actress is brushing shoulders with the who's who of the entertainment industry at prominent events across the world. A case in point is the actress' recent appearance at an event hosted by Italian luxury brand, Bulgari. On Wednesday, the actress shared a video – a compilation of stunning pictures – in which she is seen dressed for the event in a shimmery bright orange gown and jewellery by the luxury brand. The clip also features glimpses of Priyanka in a bathrobe before she steps into her gown.

Before the video, Priyanka Chopra also posted a fun selfie with actress Anne Hathaway and BLACKPINK's singer Lisa. The three powerhouse performers had come together for the jewellery event. Sharing the photo, Priyanka wrote, “And then there was us…girls just wanna have fun!” followed by a red heart emoticon. Priyanka Chopra's husband Nick Jonas was one of the first to react to the gorgeous image with fire and heart emoticons. Mexican actress Eiza González responded to the post saying, “I'm sad I missed you ladies. Have so much fun.”

Priyanka Chopra, who always has a busy schedule, often shares pictures and videos from the sets of her numerous projects.  The actress recently shared a picture from the sets of her upcoming series Citadel.  In it, she has a bruised face, thanks to the gruelling shoot and an adept makeup team. In the caption, she said, “Did u have a tough day at work as well?”

While Priyanka Chopra's career is moving from strength to strength, the actress and her husband also turned parents to a baby girl earlier this year. Last month, on the occasion of Mother's Day, the actress introduced her daughter, Malti Marie, to the world. Sharing that the little one was home after a 100-day battle in the NICU, Priyanka wrote, “On this Mother's Day, we can't help but reflect on these last few months and the rollercoaster we've been on, which we now know, so many people have also experienced. After 100 plus days in the NICU, our little girl is finally home.”

On the work front, Priyanka Chopra was last seen in The Matrix Resurrections as Sati. She will soon be seen in It's All Coming Back to Me, Jee Le Zaraa and Citadel.