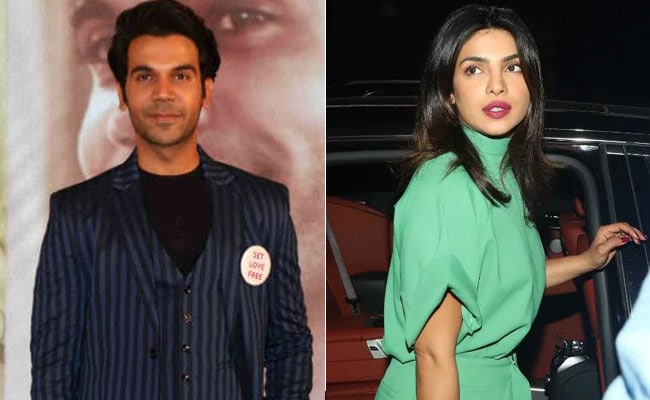 This Netflix project will mark Priyanka and Rajkummar's first film together

Netflix has roped in Priyanka Chopra for yet another project - the film adaptation of Aravind Adiga's Man Booker Prize-winning debut novel The White Tiger, said a statement by the streaming giant. Priyanka co-stars with Rajkummar Rao in the movie, which will be directed by Iranian-American filmmaker Ramin Bahrani, best known for movies such as 99 Homes and Man Push Cart. While Ramin Bahrani, who also writes the screenplay, co-produces The White Tiger with Mukul Deora (produced Bheja Fry 2), Priyanka has also come on board as the executive producer. The cast of Priyanka and Rajkummar's film also includes actor Adarsh Gourav, who is a known name from films such as MOM, My Name Is Khan, Madly and Rukh.

Confirming the news, an ecstatic Priyanka said: "I'm so excited to work with Ramin Bahrani and Netflix to bring Aravind Adiga's poignant story to cinematic life. When I read the book, I was fascinated with the perspective of the narrative."

The White Tiger tracks the journey of an ambitious chaiwalla, whose self-made journey takes him to the pinnacle of successful as a big shot entrepreneur. But the plot of the story is laden with murder, love and deceit. "The story's portrayal of raw ambition and the extent one will go to achieve one's goals is riveting. I look forward to filming this in India this fall, and also working along with Rajkummar Rao for the first time and the wonderful cast Ramin is putting together," Priyanka added.

An excited Rajkummar Rao described the film as a "world class project": "It's an exciting time for actors today and I'm thrilled to be a part of such a world-class project. I've been an admirer of Ramin's work and am excited to see The White Tiger come to life with Netflix."

Meanwhile, writer-director Ramin Bahrani said he has been conceptualising the movie for a decade now: "I have wanted to make a film of Aravind Adiga's brilliant novel The White Tiger for over a decade. I am grateful to have the opportunity to work with Mukul Deora, Netflix and such an incredible cast on this project."

This marks Priyanka's second Netflix announcement - she will also feature in Robert Rodriguez's Netflix film We Can Be Heroes, a superhero movie for kids. Priyanka starred in February release Isn't It Romantic, which had a worldwide release on Netflix. Priyanka will next be seen in Shonali Bose's The Sky Is Pink, which releases in October.