It all started when Priyanka Chopra wrote this about Nick Jonas: "When you own your own tequila at 27." One tight slap, Internet. Nick Jonas has shared a hilarious Batman-themed meme after unforgiving fans corrected his wife Priyanka Chopra for getting his age just a bit wrong in a post. "When you own your own tequila at 27," Priyanka wrote proudly on Tuesday - Nick, who will indeed be 27 on September 16, just launched a tequila brand called Villa One with designer John Varvatos. Fans began quibbling almost instantly with comments such as "26 for 14 more days," "Well, technically he's 26 until the September 16," "Isn't he still 26... Just saying" and "GF he's 26." Priyanka Chopra trended all of Tuesday for getting Nick's age wrong - even though she was only off by two weeks and to be honest, if you are turning 27 in just a few days you really are more 27 than 26.

We are with Priyanka on this one and so is Nick Jonas, who seems unfazed by the premature ageing. His response - a meme of Batman (Priyanka) slapping Robin (the Internet), saying "It's his birthday in 2 weeks." This shutdown is clearly a team effort - Nick captioned the meme: "Priyanka Chopra definitely knows my birthday everyone" and Priyanka reposted his Instagram story, writing, "Enough said Nick Jonas."

Here's how it all started. First, take a look at Priyanka Chopra's post: 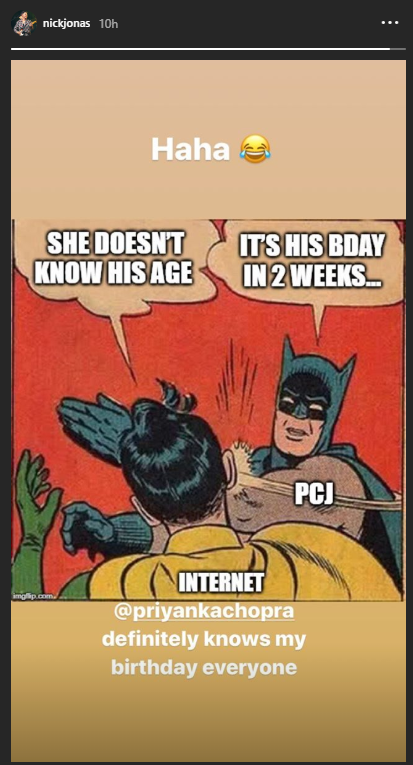 A screenshot of Nick Jonas' Instagram story.
Promoted
Listen to the latest songs, only on JioSaavn.com

And, this is what Priyanka Chopra shared on her Instagram story: 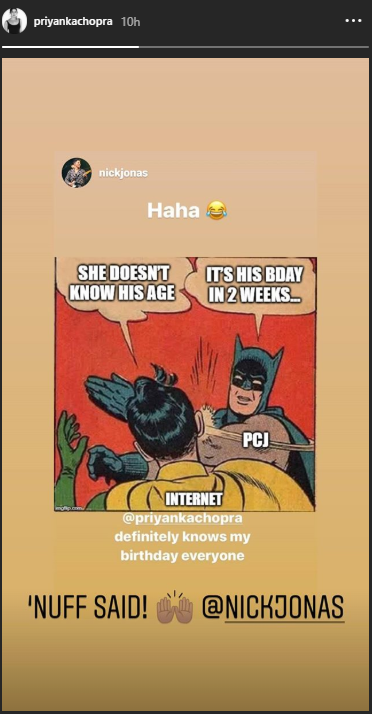 On the work front, Nick Jonas is busy with his ongoing 'Happiness Begins' tour, which kicked off on August 7 in Miami, Florida. Priyanka Chopra, on the other hand, awaits the release of her upcoming film The Sky Is Pink, which will open in theatres on October 11. In between, birthday festivities will no doubt take precedence.