Lily Jordan's adorable encounter with the Jonas Brothers has been shared on the medical center's official Facebook page. 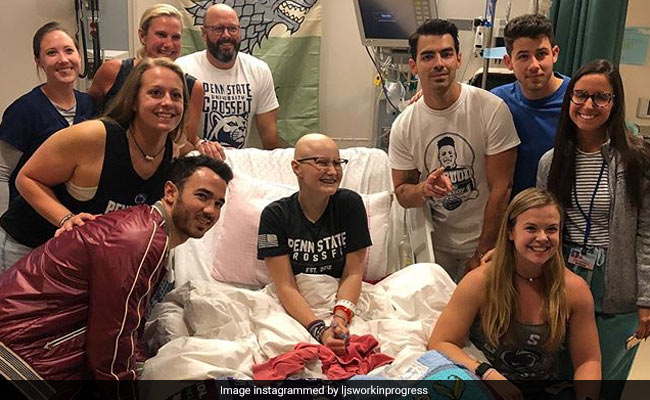 The Jonas Brothers "literally made my life", said a female fan, who was delighted to get a surprise visit by the Jo-Bros recently. The fan named Lily Jordan received a surprise visit by all three of the Jonas Brothers - Nick, Joe and Kevin - at the hospital, where she was undergoing chemotherapy sessions, because of which she had to miss her favourite band's Hershey concert in Pennsylvania. Just days ahead of the concert, Lily Jordan asked her Instagram followers to tag the Jonas Brothers, requesting them to drop by at the Milton S. Hershey Medical Center, saying its "right across the street" from concert venue Hersheypark Stadium, as she won't be able to attend it because of her chemotherapy session. And looks like word reached out and the Jonas Brothers did drop by at the hospital ahead of their Hershey concert. Joining the Jo-Bros was also Priyanka Chopra, which was a double surprise for Lily Jordan.

Lily Jordan's adorable encounter with the Jonas Brothers has been shared on the medical center's official Facebook page. In the video, Lily was seen gaping in awe as Kevin, Joe and Nick entered Lily's hospital room: "Hi, good to see you," she exclaimed when Joe said: "We saw your message, we had to come over." Kevin added: "It was everywhere. My entire feed was filled." When Nick introduced Priyanka to Lily, she said: "OMG, hi... you're beautiful."

The Jonas Brothers promised Lily Jordan that they would play her favourite song at the Hershey concert: "Do you have a favourite song that we can dedicate to you?" she was asked and Lily picked the song S.O.S from their second album. Lily, who is also a huge Game Of Thrones fan, had a gift for Sophie Turner, which she handed over to Joe Jonas.

Later, Lily Jordan thanked the Jonas Brothers for converting her "crappy chemo session into something incredibly special and unforgettable."

Wow. The power of social media you guys. YOU did this. YOU made my crappy chemo session into something incredibly special and unforgettable. Thank you thank you thank you @jonasbrothers for taking time out of your day to come pay me a visit. Literally made my life.

This is how Lily Jordan had reached out to the Jonas Brothers:

A gal can dream! #lilyseesthejonasbrotherschallenge2019 #survivingandthriving #thesunwillriseandwewilltryagain PS the amount of love and support I started feeling as soon as I posted this on my story made my heart so full and warm it's all because of you guys so thanks because y'all are the best ever

Happiness Begins is the Jonas Brother's first mega tour after they reunited earlier this year. The Jonas Brothers will cover over 70 locations across North America and Europe as part of their tour, which comes to an end next year with the final performance in Paris on February 22.