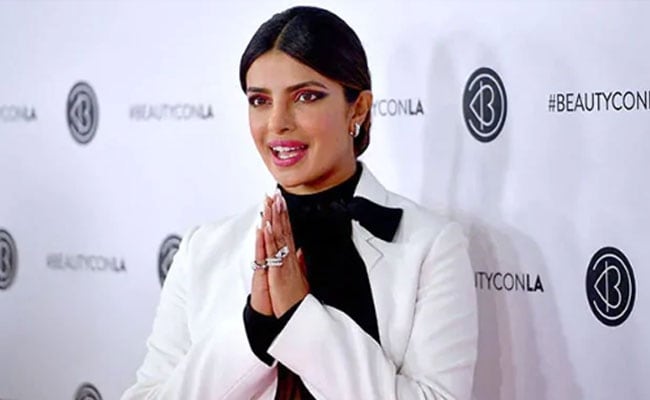 Priyanka Chopra, an UNICEF Goodwill Ambassador who has been the focal point of controversy after a public argument with a Pakistani woman, is allowed to speak in her personal capacity on issues she is interested in or concerned with, an United Nations spokesperson said reports news agency IANS. Ms Chopra, 37, has been the subject of debate over her response to criticism of her tweet after the Balakot air strike by an audience member at a beauty event in Los Angeles some weeks ago. "Don't yell... we are all here for love" Priyanka Chopra told the audience member, a Pakistani social media influencer, "War is not something I'm really fond of but I am patriotic."

After Pakistan officially asked United Nations to remove Priyanka Chopra as a Goodwill Ambassador, Stephane Dujarric, the spokesperson for Secretary-General Antonio Guterres, said at his daily briefing on Thursday that when Goodwill Ambassadors "speak in their personal capacity, they retain the right to speak about issues that interest or concern them." Mr Dujarric was responding to a question on Ms Chopra, reports IANS.

"Their personal views or actions do not necessarily reflect those of UNICEF. When they speak on behalf of the UNICEF, we expect them to adhere to UNICEF's evidence-based impartial positions," Mr Dujarric said.

"The UNICEF Goodwill Ambassadors are prominent individuals who have agreed to generously volunteer their time and their public profile to promote children's rights," Stephane Dujarric explained, reports IANS.

Priyanka Chopra was among the several celebrities who posted messages of support for the armed forces after the Balakot air strike in February; "Jai Hind #IndianArmedForces," she tweeted simply. She was criticized then in relation to her role with the UN and online petitions were launched to have her removed as a Goodwill Ambassador.

Earlier this month, Priyanka Chopra was invited to speak at BeautyCon in Los Angeles; while taking questions from the audience, Ms Chopra was accused by a Pakistani woman of "encouraging nuclear war in Pakistan." The actress responded calmly: "I have many, many friends from Pakistan and I am from India. War is not something I'm really fond of but I am patriotic, so I'm sorry if I hurt sentiments to people who do love me and have loved me. But I think that all of us have a sort of, a middle ground that we all have to walk. Just like you probably do as well. The way that you came at me right now, girl, don't yell. We're all here for love."

Priyanka Chopra's words were endorsed by several on social media, including some celebrities. After Pakistan's Human Rights Minister Shireen Mazari wrote to UN asking that she be dropped as an UNICEF Goodwill Ambassador, lyricist Javed Akhtar said at a literary event in Kolkata, "I know Priyanka Chopra personally. She is a cultured, decent and educated person and the fact remains she is an Indian. If there is some kind of a controversy and difference in point of view between an average Indian citizen (like Priyanka Chopra) and the Pakistani establishment, obviously her point of view will be an Indian point of view," reported news agency PTI.