Priyanka Chopra Trolled For Visiting Refugee Camps In Bangladesh, Asked If She's Been To Indian Camps 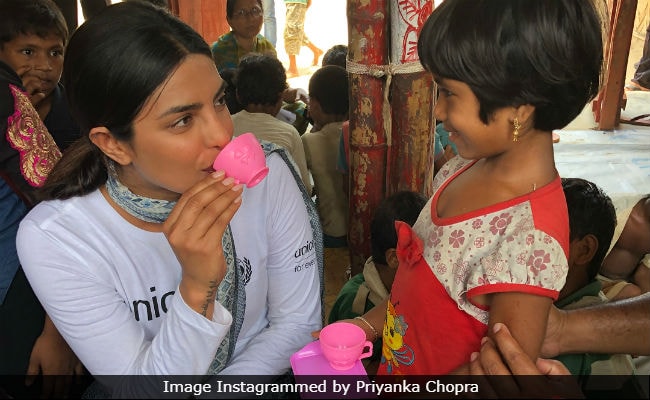 New Delhi: Priyanka Chopra, who is currently busy with her duties as UNICEF's Goodwill Ambassador for child rights in Bangladesh, was trolled for her philanthropic work. Priyanka visited Kutupalong and Balukhali refugee camps in Cox's Bazar and posted pictures on social media. Though her posts received adulation and over 6 lakh likes, there was a section of the Internet that trolled the Quantico actress saying her visit appeared to be a 'selfie stunt' and a 'publicity stunt.' Some Instagram users also slammed Priyanka for helping 'Muslim children' and asked her if she's ever visited the refugee camps in India. "Kashmiri Pandits are also there in your own country. Have you ever visited their camps?" read one comment. But that's just one part of the Internet. Some Instagram users cheered Priyanka and told her 'good job.'

Priyanka Chopra, dressed in a white UNICEF T-shirt and covered her head with a scarf, can be seen interacting with the children in the pictures. In her latest post, Priyanka can be seen sipping from a bright pink kid's toy cup. Priyanka captioned the post: "It doesn't matter where a child is from or what his or her circumstances are. No child deserves a life without hope for the future. The world needs to care. We need to care. Please lend your support."

These are Priyanka's pictures from Bangladesh:

When Mansur Ali, 12 yrs old, first came to the Child Friendly Space (CFS) at the Balukhali camp, he was only drawing scenes of bloodshed and violence. Helicopters shooting at him and his friends playing soccer... or his village and home being on fire with burning bodies all around him.. Today, his drawings reflect a more hopeful story, one we would like all these children to have. Since the #Rohingya children have arrived in Cox's Bazar, they have been living in overcrowded camps with no real place that to call their own. Imagine a space that lets you forget your troubles and be a child again... even if its only for just a few hours a day. For the Rohingya children, over 300,000, in the camps in Bangladesh this is the only space that allows them to be kids. These Child Friendly Spaces created by @unicef give kids access to art, music, dance, sport, and counselling etc. The space has often proved to be very therapeutic, helping these kids deal with the horrific situations they faced.. the @unicef aid workers work tirelessly to make sure these children find their spirit again. It doesn't matter where a child is from or what his or her circumstances are... NO child deserves a life without hope for the future. The world needs to care. We need to care. Please lend your support at www.supportunicef.org #childrenuprooted @unicef @unicefbangladesh

Across the river is Myanmar(Burma.) It's empty now, but a few months ago this area, known as "Sabrang," was filled with hundreds of thousands of Rohingya refugees fleeing Myanmar. Their trip here was filled with many hardships and tremendous danger. Many of them made their journey on foot, walking for days through the hills, then floating across the Naf River or the Bay of Bengal on make shift boats...many of them injured, pregnant, elderly, etc. Their ordeal didn't end here...after entering Bangladesh, they would often have to wait for days, sleeping in the open fields with no food or water, for aid workers to reach them. For a lot of the Rohingya children, this ordeal will leave them scarred, physically and emotionally, for the rest of their lives. With your help, maybe these children can have a chance at a future...because right now, their future is bleak. The world needs to care. We need to care. Please lend your support at www.supportunicef.org #ChildrenUprooted @unicef @unicefbangladesh

This visit should be aimed at helping refugees and not just a selfie stunt .

Another "Useful Idiot" working for a elite-nexus, who turn BLIND-EYE TO GAZA, SYRIA. where worst killing happened few days back, since 2014.

The 35-year-old actress has been associated with UNICEF for the last ten years and was appointed UNICEF's Goodwill Ambassador for child rights in 2016. She had visited Jordan last year to meet Syrian refugees.

Promoted
Listen to the latest songs, only on JioSaavn.com
Prior to her Bangladesh visit, Priyanka Chopra had attended the wedding of her friend Meghan Markle and Prince Harry at the Windsor Castle in London.

On the work front, Priyanka will be next seen in Bharat opposite Salman Khan. She will also be seen in Hollywood films such as A Kid Like Jake featuring Jim Parsons and Isn't It Romantic?