Priyanka Chopra Is Grateful To Be "Living In The Light"

Priyanka Chopra is currently living in London with her husband, singer Nick Jonas 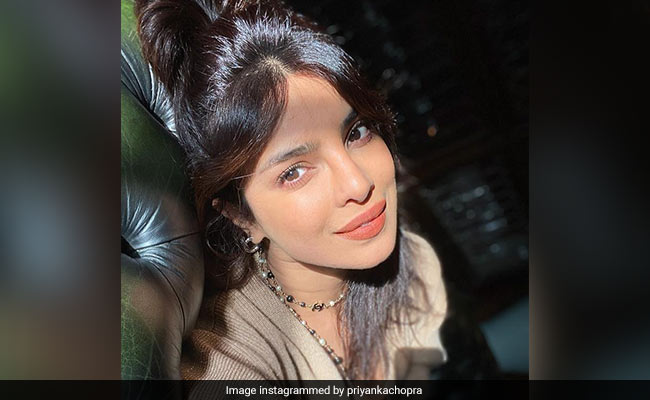 Actress Priyanka Chopra is a stunner like nobody else. The actress who is currently living in London with her husband, singer Nick Jonas, on Thursday dropped a new picture of herself on Instagram. The picture features Priyanka Chopra posing sitting on a green couch. Wearing minimal make-up, the 38-year-old actress can be seen smiling as she looks at the camera. The picture looks like it has been clicked in a dark room, but Priyanka found a spot receiving some sunlight to sit and pose. She can be seen wearing an olive-green top in the picture. Sharing the new picture on Instagram, the actress wrote: "Living in the light." She also expressed that she is thankful as she added "#grateful," to the caption.

Check out the picture here

Priyanka Chopra is a global icon, and she enjoys a fan following from across the world. Like her most other posts, this one too received scores of comments from her fans on social media. Some fans admired Priyanka's beauty and commented: "pretty," while others chose to drop heart emojis in the comments section of the post.

While Priyanka's caption might seem to be suiting her picture really well, it also suits her professional career as the actress is quite literally "living in the light." The 38-year-old actress recently made heads turn with her appearance at the red carpet of the socially distant BAFTA function held this year. Setting a style statement as always, Priyanka Chopra wore an embellished jacket with an open front and paired it with a pair of silky white trousers and black pumps. Complementing her at the red carpet was Nick Jonas who pulled off a dapper look in a black tuxedo. Priyanka attended the BAFTA function as one of the presenters.

Take a look at the couple's red-carpet look:

Last month, the actor-singer announced the Oscars 2021 nominations with her husband Nick Jonas. It was a "proud" moment for Priyanka Chopra as she announced the nomination for her film The White Tiger during the nominations. Directed by Ramin Bahrani, The White Tiger received the Oscar nominations in the category of the Best Adapted Screenplay. Besides co-starring in the film with Adarsh Gourav and Rajkummar Rao, the actress has also co-produced it with Ramin Bahrani, and filmmakers Mukul Deora and Ava DuVernay. Priyanka is still basking in the success of the film which received positive reviews from every corner.