"She is the source of a lot, if not all of my inspiration when I'm writing," said Nick Jonas 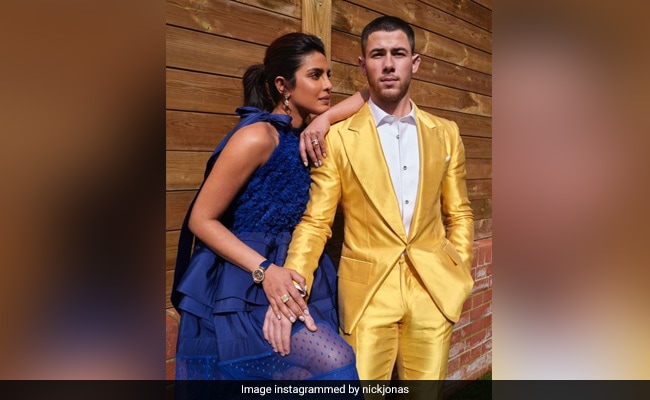 Singer and actor Nick Jonas, in an interview with L'Officiel, revealed that he's "really fortunate" to have his wife, actress Priyanka Chopra, as his "muse." Nick Jonas and Priyanka Chopra got married in Christian and Hindu ceremonies in Jodhpur's Umaid Bhawan Palace in December 2018 after dating for almost a year. Talking to the magazine about his wife and how she is "the source of a lot, if not all of his inspiration when he's writing," Nick Jonas, who is currently basking in the success of his new album Spaceman, said: "I feel really fortunate to have that muse and that support propels me to continue to write; it's omnipresent for me. We're together as much as we can be to bank as much time for those moments when we know that we inevitably have to be apart."

Nick Jonas and Priyanka Chopra recently turned heads at the BAFTA Awards as the duo walked the red carpet in stunning ensembles. Priyanka picked an embellished jacket with an open front and a pair of silky white trousers from the studios of Pertegaz while Nick looked dashing in a black Giorgio Armani tuxedo.

Last month, Priyanka Chopra trended big time after she featured on Oprah Winfrey's talk show Super Soul. She opened up about her relationship with Nick Jonas, whom she first met at the Met Gala 2017, in the interview and said: "I honestly didn't take it very seriously when Nick was texting me. I was 35 and I want to get married and I want to have kids. He is in his 20s... I don't know if that's something he would want to do. I did that to myself for a while till I actually went out with him. Nothing surprised me more than him. He's such a self-assured man, so sensible, so excited about my achievements, my dreams."

Nick Jonas married Priyanka Chopra in the first week of December 2018 in Udaipur.

The actress was last seen in The White Tiger and has several projects lined up such as Matrix 4, Citadel and Text For You.

Trending: For Justin Bieber And Wife Hailey, "The First Year Of Marriage Was Tough"