Priyanka Chopra is busy shuttling between multiple cities and her current stop is Singapore, where Nick Jonas performed at a concert 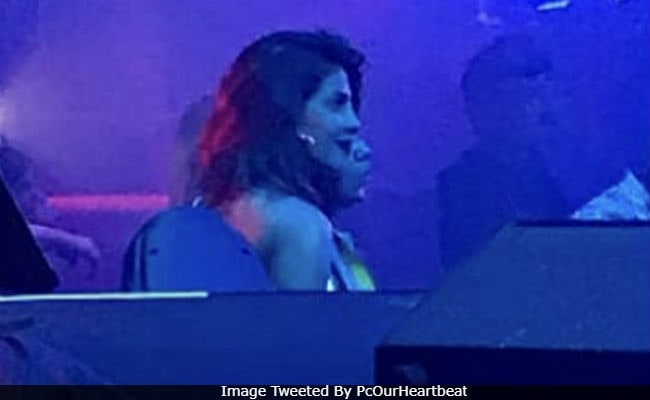 Actress Priyanka Chopra is busy shuttling between multiple cities and her current stop is Singapore, where her rumoured boyfriend Nick Jonas performed at a concert. In the pictures and videos shared by the actress' fan clubs on social media, Priyanka can be seen cheering for Nick. Priyanka opted for a white outfit for Nick's concert and needless to say, she looked chic (as always). Indonesian singer Afgansyah Reza, who also performed during the concert, shared two separate pictures with Priyanka and Nick. "One of the most humble persons I have ever met. Thank you for being so kind, Priyanka Chopra. It was lovely to meet you," the singer captioned his post with Priyanka. Their picture was clicked by Nick.

One of the most humble person i have ever met. Thank you for being so kind @priyankachopra. It was lovely to meet you. . . And this picture was taken by @nickjonas. Love them! Thank you @mtvasia.

Last month, Priyanka had accompanied Nick to his concert in Brazil, just after the rumoured couple had visited Mumbai.

Priyanka and Nick are rumoured to be engaged already and are reportedly looking forward for a wedding in September. A couple of weeks ago, after Priyanka dropped out of Salman Khan's Bharat, reports about her speculated engagement to Nick Jonas featured in headlines. Director Ali Abbas Zafar announced that she quit Bharat for a "very, very special reason" and informed the team "in the Nick of time."

Several international websites reported that the rumoured couple got engaged in London, where Priyanka celebrated her birthday with Nick.

Meanwhile, on the work front, Priyanka just wrapped the third and the last season of her American TV show Quantico. She has reportedly been signed opposite Chris Patt for Cowboy Ninja Viking. Shonali Bose's The Sky Is Pink with Farhan Akhtar is her next Bollywood film. She also has Hollywood films like Isn't It Romantic? and A Kid Like Jake in the line-up.