Priyanka Chopra And Nick Jonas' Jodhpur Wedding: 'Guests Will Need A Vacation After This,' Says The Actress 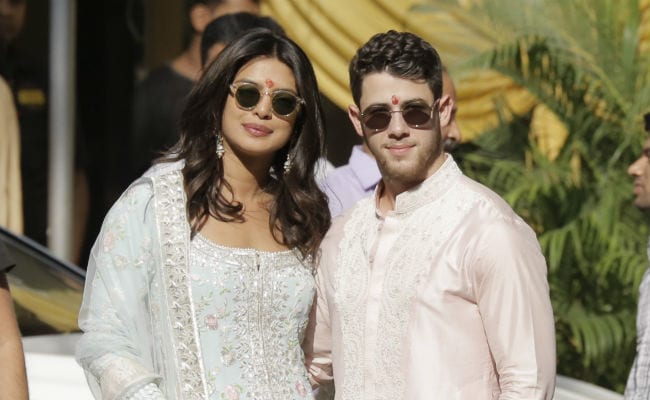 Priyanka Chopra and Nick Jonas outside her Mumbai home

Quantico star Priyanka Chopra and US singer Nick Jonas are to marry this weekend in a two-day ceremony at one of India's most opulent royal palaces.

Priyanka Chopra, 36, and 26-year-old Nick Jonas were engaged this year after meeting at an Oscars after-party in 2017.

The couple arrived with their families in Jodhpur on Thursday, and headed to the Umaid Bhawan Palace where the wedding will take place.

"People will need vacations after this wedding," Chopra said in an interview with Vogue magazine published on Thursday.

The palace is the home of the Jodhpur royal family, and is believed to be the world's sixth largest private residence. Part of the palace has been converted into a Taj heritage hotel with peacocks roaming 26 acres of landscaped gardens.

Details about the wedding have been scarce, but Hollywood actors Dwayne Johnson, Lupita Nyong'o and talk show host Kelly Ripa are among those expected to attend, as per media reports.

Vogue said there would be two ceremonies - as per traditional Hindu rituals and a Christian one that would be officiated by Nick's father.

The groom will be dressed in royal attire and enter the wedding on a horse, a popular tradition in most Indian weddings, Vogue said.

Priyanka Chopra, who headlined three seasons of the ABC crime drama Quantico, is one of Bollywood's biggest female leads with acting credits in several big-ticket films.

Nick and his brothers Kevin and Joe formed a pop-rock band, The Jonas Brothers, in 2005 and soared to fame as members of Disney's stable of teenage stars. The band split up in 2013.

Priyanka Chopra's engagement and the lead-up to the wedding with Nick Jonas has been covered by media.