Priyanka Chopra, A Tourist In Rome 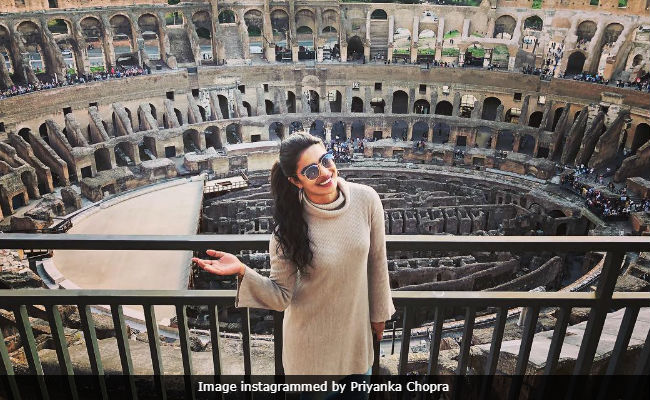 New Delhi: When you are busy reading this story, Priyanka Chopra will be chilling out max in Rome. The 35-year-old actress is on a vacation in Rome and she is (as usual) posting updates for all her fans. Priyanka soaked the sun in, dressed in denims and a turtle-neck sweater top, in the streets of Rome, visting all the major tourist attractions of the place. Standing outside the St Peter's Basilica in the Vatican City, Priyanka experienced "a moment of purity, faith and silence." She added: "Faith is such an amazing thing." In another picture, Priyanka smiled standing against the backdrop of Castel Sant'Angelo. Take a look at Priyanka's Roman vacation album:

Beautiful Vatican.. a moment of purity,faith and silence.. #PCinItaly ps: chk out the line. Miles long. Faith is such an amazing thing.

There is no easy walk to freedom... #werkit #stoneage #onwardsandupwards

Some things just take your breath away. #PCinItaly

Promoted
Listen to the latest songs, only on JioSaavn.com
Priyanka Chopra, arguably one of the busiest Bollywood stars, is all set to start the shoot of Quantico 3. Priyanka plays lead character Alex Parrish in the American crime thriller which started in September 2015. Thanks to the show, Priyanka twice made it to Forbes' list of Highest Paid TV Actresses. Priyanka retained her spot twice and for the next year she may get a better position courtesy her upcoming production venture, an American television show based on the life of Bollywood actress Madhuri Dixit.

As for films, Priyanka Chopra was last seen in Baywatch (her Hollywood debut). Since then she has made two more Hollywood films - A Kid Like Jake and Isn't It Romantic? - in which she features in supporting roles. Priyanka Chopra, who has produced several regional films in India, hasn't announced her next Bollywood project yet.