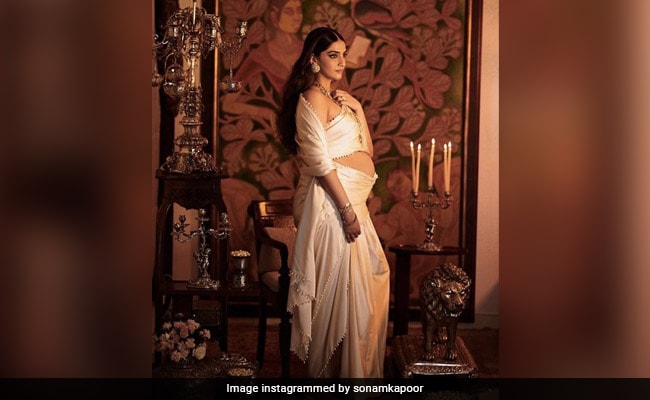 Sonam Kapoor is radiating pregnancy glow in the latest photos. Last night, she attended designer Abu Jani's birthday eve and for the occasion, she wore a white satin saree from the designer duo Abu Jani and Sandeep Khosla. She styled her saree with her mother Sunita Kapoor's statement jewellery and looked gorgeous. She completed the look with matching juttis and a strapless blouse. In the photos shared online, Sonam Kapoor is seen showing her baby bump. With dark kohled eyes, nude lips, and center-parted hair, Sonam is a sight to behold! She captioned the photos as "Last night for my @abujani1 birthday evening. In @abujanisandeepkhosla and @kapoor.sunita." Sonam was designed by her sister and filmmaker Rhea Kapoor.

Sharing photos from the maternity shoot, Sonam and Anand had written, "Four hands. To raise you the very best we can. Two hearts. That will beat in unison with yours, every step of the way. One family. Who will shower you with love and support? We can't wait to welcome you. #everydayphenomenal #comingthisfall2022."

Sonam Kapoor had made her first public appearance after her pregnancy announcement in March. She, along with her husband Anand Ahuja and the Kapoor family, had attended the Veg Nonveg store launch in Mumbai. For the launch, Sonam had opted for a white tank top with blue joggers and a matching coat.

On the work front, Sonam Kapoor was last seen in The Zoya Factor. She is yet to announce her next project.