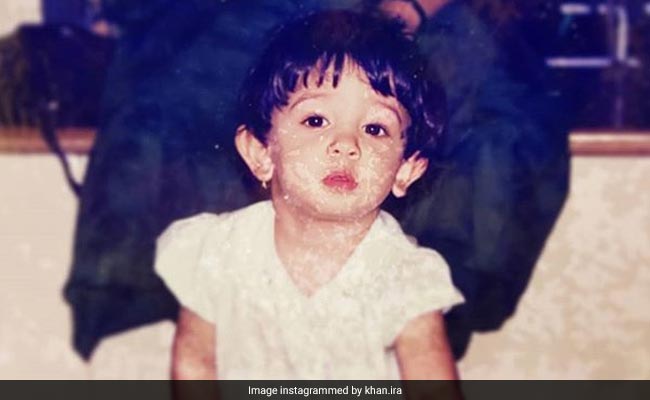 If you believe that "babies make the best faces," then this post by Aamir Khan's daughter Ira Khan is especially for you. The aspiring director treated her fans on Thursday with a Throwback picture and we totally love it. Why wouldn't we? Ira Khan's expression in the throwback picture is already winning hearts on the Internet. In the photo, baby Ira Khan looks beyond adorable in a white frock. Sharing the picture on her Instagram profile, she wrote: "Mood" and accompanied it with hashtags such as #throwbackthursday #tiredbuthappy and #babiesmakethebestfaces."

Ira Khan was born in 1997 to Aamir Khan and his first wife Reena Dutta, who has shared screen space with him in Qayamat Se Qayamat Tak. Other than Ira, they have a son named Junaid. After divorcing Reena in 2002, Aamir Khan married filmmaker Kiran Rao in the year 2005. The couple welcomed their son Azad Rao Khan in 2011.

Ira Khan frequently delights her fans by posting adorable throwback pictures. Earlier this month, she shared another throwback photo, in which she could be seen playing with her cousin wearing a saree.

Misshhtttyyyy! Happy Birthdaaaayyy How much you've grown Always here for you. I miss our tea parties! Let's have one soon! . . . #cousin #cousinsister #sisterlove #birthday #21stbirthday #21

Meanwhile, also check out the other throwback pictures that Ira Khan has added to her Instagram diaries:

HOW CUTE ARE THESE PICTURES?! I didn't even know they existed. Thank you @sehuhegde we were such cool kids.

Ira Khan, who is ready to debut as a director with Medea, had said that she prefers to work behind the camera. In an interview with Hindustan Times, Ira said: "I've always felt more comfortable and enthusiastic about working off-stage or behind the camera rather than being in front of it."