Pictures of the Jonas' taking over Paris' party scene ahead of Joe Jonas and Sophie Turner's second and official wedding are now going viral. 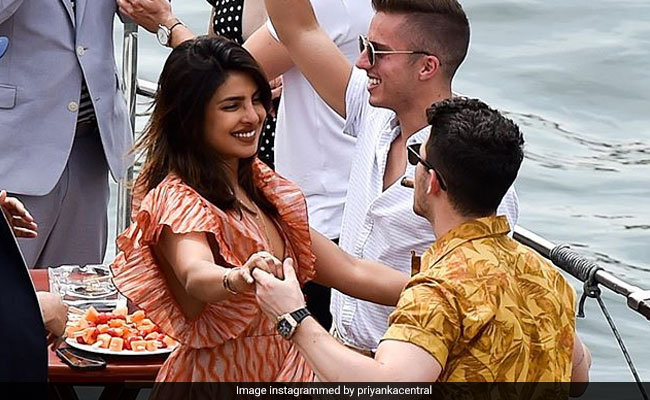 Pictures of the Jonas' taking over Paris' party scene ahead of Joe Jonas and Sophie Turner's second and official wedding, which is reportedly scheduled in a few of days, are now going viral on the Internet. Priyanka Chopra, her husband Nick Jonas along with Joe Jonas and Sophie Turner partied with their close friends on a riverboat on Monday afternoon. Priyanka was dressed in a ruffled Alexandra O'Neill dress while Nick wore a summer yellow casual shirt with denims. Sophie, who married Joe Jonas in an impromptu chapel wedding in Las Vegas last month, opted for denims and tee casual look. Joe Jonas shared BTS glimpses on his Instagram story, which were reported by some fan clubs.

Many pictures from the Jonas' Parisian cruise have been shared by fan clubs dedicated to Priyanka Chopra. In the pictures, Priyanka and Nick, dancing together, appear to be having a gala time. Ditto for Sophie and Joe.

Here are all the pictures and videos from the Jonas' Parisian cruise:

After the cruise, Priyanka Chopra changed into a shimmery Peter Pilotto outfit, which Nick complemented in a bottle green suit. The details of this outing are awaited.

Sophie Turner, best-known as Sansa Stark of Game Of Thrones, married Joe Jonas in May at a chapel in Las Vegas in a ceremony which was officiated by an Elvis impersonator. The wedding took place right after the Jonas' attended the Billboard Awards. Speaking to Access, Priyanka said: "We were at the Billboards and Joe, I think, had this idea that he wanted to do this. We had these little black cards that we all got and were randomly inviting our friends like people that we met. We were like 'Alright, we're going to set up this wedding now. We're going to the chapel right from here and please arrive... please arrive'."

Sophie Turner was last seen in X-Men: Dark Phoenix. Joe and Nick along with their brother Kevin are scheduled to leave for their 'Happiness Begins' tour come July.