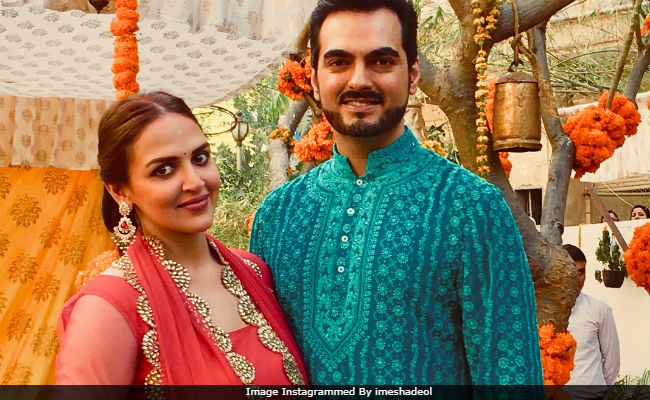 New Delhi: Actress Esha Deol and her husband Bharat Takhtani are currently busy attending a family wedding. It is Esha's brother-in-law Devesh's wedding. She posted several pictures from the wedding festivities, which was also attended by her mother Hema Malini. In the picture, Esha looked beautiful in a peach-coloured outfit while Bharat complemented her in blue kurta pyjama set. Hema Malini picked a white outfit for the function. Esha has also posted pictures of other family members, including her in-laws. Esha Deol married Bharat Takhtani in 2012. The couple became parents to a baby girl last October. They have named their daughter Radhya.

This picture of Esha was clicked by her mom Hema Malini.

Esha is the elder daughter of veteran actors Hema Malini and Dharmendra. Her younger sister Ahana is married to businessman Vaibhav Vohra. The couple together have a son Darien.

Of naming their daughter Radhya, Bharat told news agency IANS, "We are very happy to announce that our daughter will be named as Radhya Takhtani. The name has been jointly decided by Esha and me."

Promoted
Listen to the latest songs, only on JioSaavn.com
Esha's two baby showers were held in August. The first ceremony was as per Sindhi traditions and the second baby shower was hosted by her sister Ahana.

Esha Deol made her Bollywood debut with Koi Mere Dil Se Poochhe, which released in 2002. She has also starred in films such as Na Tum Jaano Na Hum, Dhoom, Yuva, No Entry and Dus. Esha was last seen in 2015's Kill Them Young.
Comments
esha deolEsha Deol Bharat Takhtani