On his 82nd birthday, Dharmendra received wishes on social media from Esha and wife Hema Malini 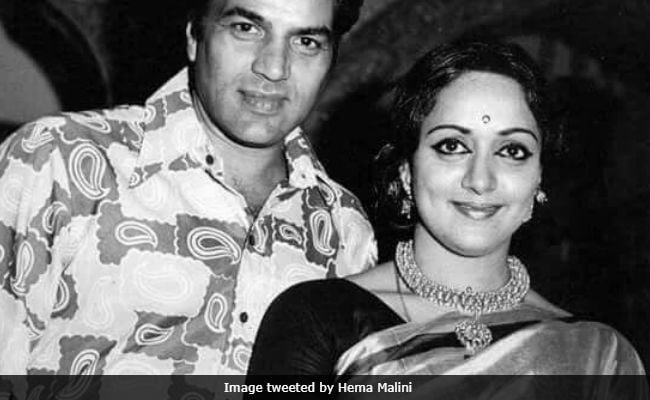 New Delhi: Dharmendra is a year older, or as his daughter Esha Deol puts it 'a year younger,' today. On his 82nd birthday, the veteran star received wishes on social media from Esha and wife Hema Malini. "A hero to the nation but a man so simple and humble," wrote Esha on Instagram, "No one can or ever will match up to you. You truly have a heart of gold and a fist that no one would dare to hold." Hema Malini tweeted old photos of them together, writing: "On Dharamji's birthday, I pray for his happiness and good health. God bless him always."

My father a hero to the nation , but a man so simple and humble.... As u turn a year younger today all I can say is " no one can or ever will match up to you! U truly have a heart of gold and a fist that no one would dare to hold " stay healthy stay happy and stay by my side forever and ever.... I love u my papa ! Happy birthday! @aapkadharam

On Dharamji's birthday, I pray for his happiness & good health. God bless him always
Nostalgia time! One of our early fotos together pic.twitter.com/1nr4cku9GS

Dharmendra, born in Punjab, is known for his rough and tough screen persona and for playing the rustic but mighty hero in several action films. His most iconic role is Veeru in Sholay, on the sets of which film romance blossomed between Dharmendra and Hema Malini, playing village belle Basanti. They also starred in films like Jugnu and Seeta Aur Geeta.

Dharmendra was already married and a father of four but he and Hema Malini married anyway in 1979. Esha Deol is the elder of their two daughters - her younger sister is named Ahana. Esha, a former actress, married businessman Bharat Takhtani in 2012 and recently gave birth to a baby girl.

Promoted
Listen to the latest songs, only on JioSaavn.com
Dharmendra makes film appearances sporadically. He was last seen in 2015 film Second Hand Husband and is working on the third Yamla Pagla Deewana film with sons Sunny and Bobby Deol.