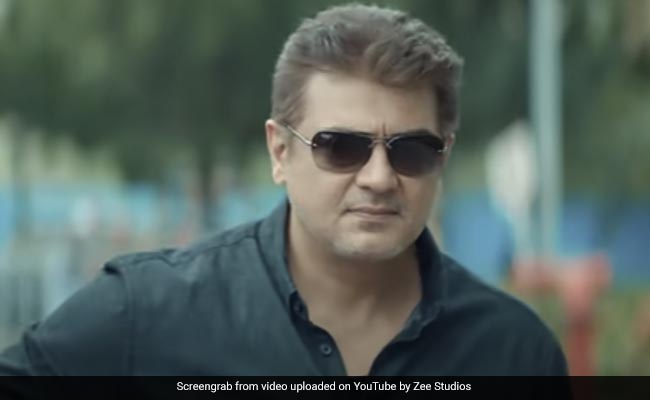 The opening of Tamil superstar Ajith Kumar's new film Valimai, releasing tomorrow, has been marred somewhat after a petrol bomb was thrown at the actor's fans in Coimbatore, news agency PTI reports. Two men on a motorbike rode up to a cinema in Coimbatore's Gandhipuram neighbourhood early Thursday morning; they fled after throwing the petrol bomb at a man named Naveen Kumar, police said, reports PTI. Mr Kumar, who was erecting a poster of Ajith Kumar, received minor injuries. Security has been increased outside cinemas across Coimbatore and an investigation is on; police suspect the attack was motivated by rivalry between Ajith's fans over erecting banners, PTI reports.

Ajith Kumar's fans are notoriously aggressive. In 2017, his team released a statement distancing himself from fan clubs who use Ajith's absence from social media to present opinions and views of their own in the guise of the actor's. "Persons misusing our client's name have also been trolling members of the film industry, journalists, critics and other individuals," the statement, clarifying that Ajith does not endorse fan clubs, unlike some stars.

Ajith's fans are also known for their intense rivalry with actor Vijay's fans which, bolstered by social media, has reached epic proportions. Today, for instance, Vijay's fans are trending #ValimaiDisaster on Twitter.

Last year, Ajith Kumar asked fans and the media to drop the prefix Thala from his name. South stars are commonly referred to by an epithet - Superstar for Rajinikanth, for instance. Ajith's character in 2001 film Dheena was called Thala Dheenadhayalan and the prefix stuck; since then, fans called him Thala Ajith and were prone to extreme annoyance were anyone to refer to him as plain old Ajith. However, a statement released on behalf of the actor, who is not on social media, asked that he be called just that - "To the respected members of the media, public and genuine fans. I henceforth wish to be referred to as Ajith, Ajith Kumar or just AK and not as "Thala" or any other prefix before my name."

Ajith Kumar, 50, is the star of hits such as the remake of Rajinikanth's Billa, Citizen, Varalaru and Mankatha. He was last seen in 2019 film Nerkonda Paarvai. Valimai, an action thriller, co-stars Huma Qureshi and is directed by H Vinoth.