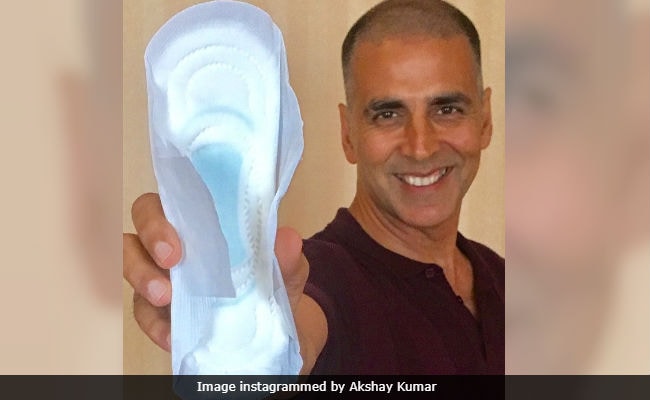 In the trailer of his soon-to-release film PadMan, Akshay Kumar can be seen wearing a sanitary pad and talking about menstrual hygiene. Ahead of the film's release, team PadMan challenged their colleagues to pose with a sanitary pad to tell people that 'holding a sanitary pad is not a sin.' The 'PadMan Challenge' gained momentum with the support of celebrities like Aamir Khan, Deepika Padukone, Anushka Sharma, Alia Bhatt and Anil Kapoor among others.

Thank you for tagging me @akshaykumar ! Yes, that's a Pad in my hand & there's nothing to be ashamed about...It's natural! Period. #PadManChallenge Copy, Paste this & Challenge your friends to take a photo with a Pad! Here I am challenging Badminton Champion & Olympic Medal Winner @pvsindhu1

Thank you @mrsfunnybones
Yes, that's a Pad in my hand & there's nothing to be ashamed about. It's natural! Period. #PadManChallenge. Copy, Paste this & Challenge your friends to take a photo with a Pad. Here I am Challenging @SrBachchan , @iamsrk & @BeingSalmanKhanpic.twitter.com/lY7DEevDmD

Talking about the concept of PadMan, Akshay told IANS that earlier he did not have enough money to produce films based on socially relevant topics. His previous film Toilet: Ek Prem Katha was a critique on open defecation and the need to improve personal hygiene. The film also made it to Microsoft co-founder Bill Gates' best of 2017 list.

"I always wanted to work and make such films but I was not a producer during that time. I didn't have enough money, but now I can. My wife told me about Arunachalam Muruganantham and then we met R Balki. So we thought about making this movie. Even Hollywood does not have a single film on sanitary pads or menstrual hygiene. People always make documentaries but they don't want to make commercial films because they want to shy away from the issue. We have tried to do that," said Akshay.


Promoted
Listen to the latest songs, only on JioSaavn.com
PadMan is directed by R Balki and produced by Twinkle Khanna. The film, which is releasing on February 9, also stars Sonam Kapoor and Radhika Apte.