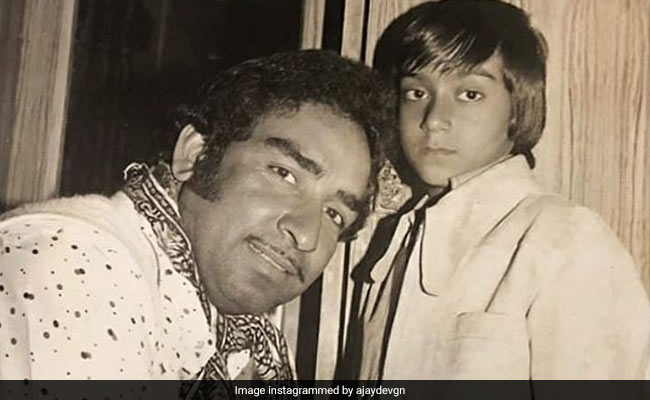 On this Teachers' Day, actor Ajay Devgn remembered his late father Veeru Devgan for his "invaluable life lessons" and shared a heartfelt post for him on his Instagram account. Veeru Devgan, who was a renowned stunt director, died at the age of 85 on May 27 due to age-related issues. Sharing a throwback picture with his "guru", Ajay Devgn wrote: "My father, my guru. He gave me invaluable life lessons." Veeru Devgan is known for his iconic work in movies like Mr. India, Roop Ki Rani Choron Ka Raja and Shahenshah among others. He has choreographed action sequences in nearly 80 Bollywood films.

The late action director has also acted in a couple of films such as Muqabla, Mr. Natwarlal, Sar Utha Ke Jiyo', Kranti, Captain Singh, and Ek Khiladi Bawan Pattey. Veeru Devgan made his directorial debut with the 1999 film Hindustan Ki Kasam, which featured Ajay. The father-son duo have worked together in several films such as Ishq, Jaan, Haqeeqat, Dilwale, Divya Shakti, Jigar and Phool Aur Kaante. He has also produced films like Hindustan Ki Kasam, Dil Kya Kare and Singhasan.

Now, take a look at Ajay Devgn's "Teachers' Day" post for his father:

My Father, My Guru. He gave me invaluable life lessons #HappyTeachersDay

Several other Bollywood celebrities such as Kajol and Shraddha Kapoor paid respect to their teachers on social media. Sharing a Todd Whitaker's quote on Instagram, Kajol wrote: Teachers are not just teachers - They are the managers of the world's greatest resource - Children. Shraddha Kapoor also expressed her gratitude towards her teachers and wrote: "There has been so much learning from so many teachers! Forever grateful to each and every one of them. #HappyTeachersDay."

Teachers are not JUST teachers. They are the managers of the world's greatest resource - children! #everyday #teachersday #takingcareofthefuture

There has been so much learning from so many teachers! Forever grateful to each and every one of them. #HappyTeachersDay

Teacher's Day is celebrated every year on September 5 to mark the birth anniversary of Dr Sarvepalli Radhakrishnan, an exemplary teacher and former President of India.