"There is no one like you!" Ekta Kapoor to Smriti Irani on her birthday 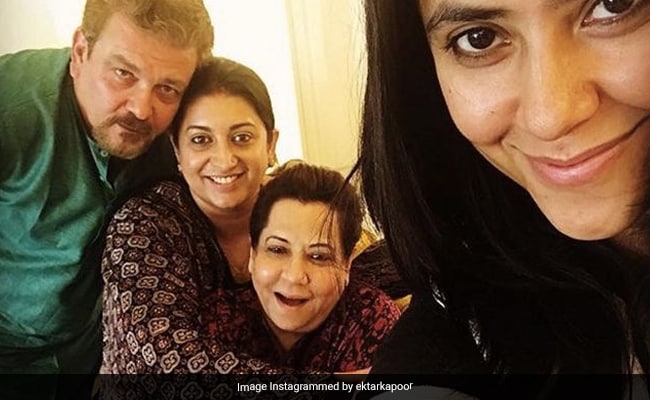 "Happy b'day buddy!" Ekta Kapoor wrote for Smriti Irani on the actress' 45th birthday. Smriti Irani is "super" at everything, thinks Ekta, which she announced to the world in her birthday greeting for the actress-turned politician. "There is no one like you! A super mom... wife... friend... human and a leader extraordinaire," is how Ekta described Smriti Irani. Ekta also added an ROFL touch to her post, commenting on Smriti Irani's fitness routine: "Today get off your diet please! You have lost a lot of weight and I'm jealous!" Ekta attached the note to a bunch of cherished memories she shares with Smriti Irani - we also spotted Smriti Irani's husband Zubin Irani, Ekta Kapoor's mom Shobha Kapoor, actress Sakshi Tanwar in the photos.

Ekta Kapoor and Smriti Irani go a long way - she made her acting debut in a lead role with Ekta Kapoor's iconic TV show Kyunki... Saas Bhi Kabhi Bahu Thi. In 2003, Smriti Irani ventured into politics in 2003 and is currently the Union Minister for Women and Child Development and Textiles.

Earlier this month, Ekta Kapoor wished Smriti and Zubin Irani with a heart-warming post on their 20th wedding anniversary. "Happy anniversary, love birds," Ekta Kapoor wrote for the anniversary couple. In the comments section, Smriti Irani responded with a friendly version of a thank you: "Thanchuuu," she wrote and dropped a few red hearts.

Smriti Irani is best known for playing the role of Tulsi Virani in Kyunkii...Saas Bhi Kabhi Bahu Thi. She has also featured in shows such as Hum Hain Kal Aaj Aur Kal, Thodi Si Zameen Thoda Sa Aasmaan and Virrudh, among others.