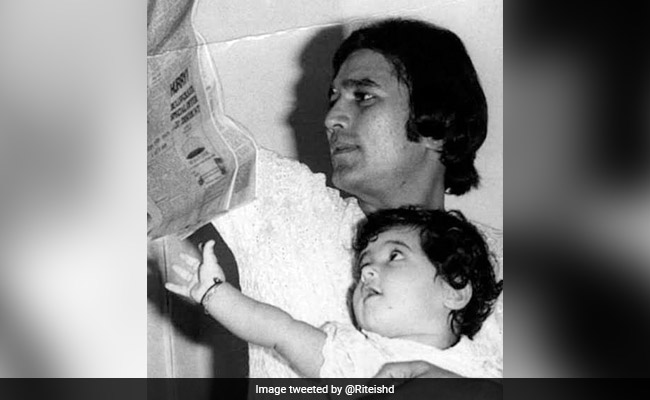 On his 79th birth anniversary, fans remembered legendary actor Rajesh Khanna on social media. Twitter, on Sunday, was bombarded with birthday wishes for the late actor. Interestingly, Twinkle Khanna's birthday coincides with her father's birth anniversary. The 46-year-old author wished her father by sharing a throwback picture of him on her Instagram profile. No caption needed. Another million-dollar wish came from Riteish Deshmukh, which was a combined greeting for Rajesh Khanna and Mrs Funnybones. The actor, who recently co-starred with Twinkle's husband Akshay in Housefull 4, shared a million dollar throwback picture of Rajesh Khanna with Twinkle.

Meanwhile, Twinkle's cousin Karan Kapadia shared an adorable picture along with her and Dimple Kapadia, on his Instagram profile and he captioned it: "A very happy birthday to the true leader of the family. I will always judge you ... Oops! I mean love you. Hahaha... Shajojidar (does hand action)."

A very happy birthday to the true leader of the family, I will always judge you ... oops I mean love you haha ...Shajojidar (*does hand action *) @twinklerkhanna

Rajesh Khanna, who made his Bollywood debut in the year 1966 with Aakhri Khat, died of cancer in July 2012. Rajesh Khanna was the star of hit films like Aradhana, Anand, Kati Patang and Safar among many others. He married actress Dimple Kapadia in 1973. In the same year, Dimple Kapadia's debut Bollywood film Bobby released.

Twinkle Khanna is a celebrated columnist and the author of Pyjamas Are Forgiving, The Legend Of Lakshmi Prasad and Mrs Funnybones - all of which were best-sellers. Twinkle is also an interior decorator, the owner of The White Window, and a film producer. Her last project as a film producer was the National Award-winning film PadMan, which starred her husband Akshay Kumar in the lead role.