Twinkle Khanna shared a picture from her childhood album with a heart-wrenching caption. 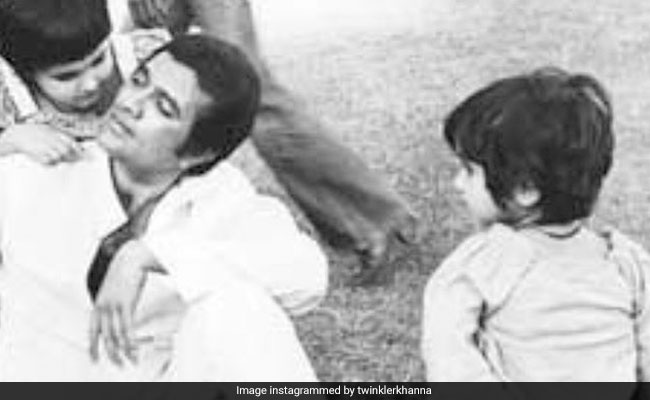 Twinkle Khanna's nostalgia-dipped post on father Rajesh Khanna's death anniversary (on July 18) will make your heart ache a bit. The actress dug out a picture from her childhood photo album, in which Rajesh Khanna appears to be spending quality time with his daughters Twinkle and Rinke, which Twinkle captioned, "Still lives on - In my heart and within all the millions who made space for him in theirs." Twinkle Khanna is the elder of Rajesh Khanna and Dimple Kapadia's two daughters. Twinkle also shares her birth date with her father - December 29.

Still lives on-in my heart and within all the millions who made space for him in theirs..

Twinkle Khanna, like her parents, aspired to be an actress and she made her Bollywood debut in 1995 film Barsaat. She went on to star in films like Baadshah with Shah Rukh Khan, Jab Pyaar Kisise Hota Hai with Salman Khan and Mela, co-starring Aamir Khan. After a string of flop films Twinkle quit films and her last onscreen appearance was in 2001 film Love Ke Liye Kuch Bhi Karega.

Twinkle, who is married to actor Akshay Kumar, is now a successful humour columnist, best-selling author of three novels and a film producer. Mrs FunnyBones, The Legend Of Lakshmi Prasad and Pyjamas Are Forgiving are all published in her name.

Last year, she started her production house Mrs FunnyBones Films and her first film under it was PadMan, starring Akshay in the lead role along with Sonam Kapoor and Radhika Apte.

Twinkle Khanna and Akshay Kumar are parents to a son Aarav and daughter Nitara.