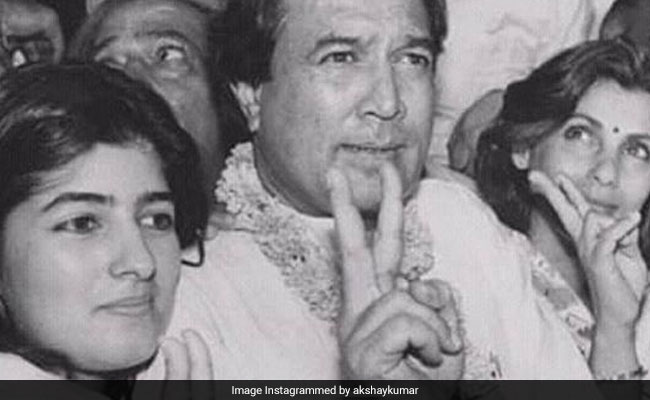 Akshay Kumar shared a million dollar post for his father-in-law Rajesh Khanna and wife Twinkle, who share the same birthday. On Saturday, Akshay Kumar dug out a really old photo from the family photo archive featuring Rajesh Khanna, Twinkle and his Dimple Kapadia. In his post dedicated to the father-daughter duo, Akshay Kumar wrote how he had heard "fascinating tales" of Rajesh Khanna's "superstardom" when he was young and had never imagined that one day he would end up marry his "fascinating daughter". "While growing up I'd hear fascinating tales of his superstardom, never imagining one day I'll marry his fascinating daughter... Thank you for giving me this precious one. Happy birthday to both of you," Akshay Kumar wrote. The monochrome photo shared by Akshay appears to be from a campaigning schedule after Rajesh Khanna joined politics in the Eighties. The post has close to six lakhs likes in less than two hours.

While growing up I'd heard fascinating tales of his superstardom, never imagining one day I'll marry his fascinating daughter...thank you for giving me this precious one Happy birthday to both of you

Earlier, Twinkle Khanna had also shared a post for Rajesh Khanna on his birth anniversary. Twinkle shared a an old photo of her father and accompanied it an interesting caption which read: "As a toddler, I was convinced that all the truckloads of flowers that would arrive for his birthday were actually for me."

As a toddler, I was convinced that all the truckloads of flowers that would arrive for his birthday were actually for me... #nowandforever

Rajesh Khanna was born in Amritsar as Jatin Khanna and is best known for his films like Aradhana, Anand, Kati Patang, Amar Prem, Aap Ki Kasam and Safar. Rajesh Khanna, who was called Bollywood's 'first superstar,' died of cancer on July 18, 2012.

Rajesh Khanna married actress Dimple Kapadia in 1973 and the couple had two daughters - Twinkle (elder) and Rinke (younger). Twinkle Khanna married Akshay Kumar in 2001, with whom she had co-starred in films like Zulmi and International Khiladi. The couple are parents to two children Aarav and Nitara.