Nothing Stops Twinkle Khanna Trolling Akshay Kumar, Not Even His Forbes List Ranking

Twinkle Khanna jestingly wrote, "Just hanging in there! Not happy with hitting the Forbes list - he wants to make a quick 100 pounds here as well." 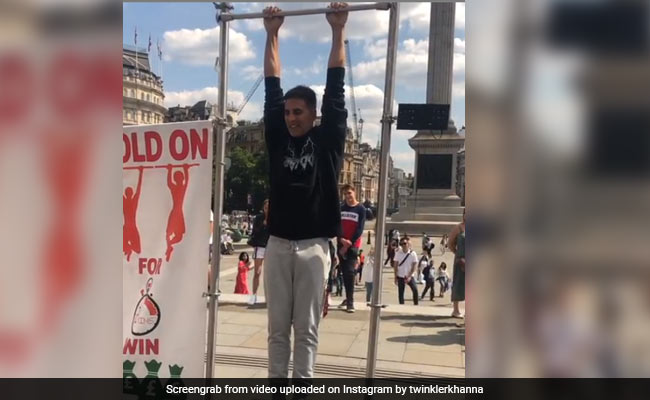 Akshay Kumar, who was the only Indian on Forbes list top earning celebs worldwide in 2019, is happy to make a 'quick 100 pounds' just by hanging around, his author wife Twinkle Khanna shared on social media. Twinkle and Akshay are on a vacation In London, where the Khiladiyon Ka Khiladi actor participated in a roadside gig, in which one can make money by hanging on to a pull up bar. Twinkle shared the video, in which Akshay, a fitness enthusiast, gleefully hangs on and makes some quick bucks. She jestingly wrote, "Just hanging in there! Not happy with hitting the Forbes list - he wants to make a quick 100 pounds here as well."

Just hanging in there! Not happy with hitting the Forbes list- he wants to make a quick 100 pounds here as well :) #GoofingAround

Akshay is the only Indian who made it to the aforementioned Forbes 100 Celebs list of 2019 with an annual earning of $65 million. He ranked #33 on the list. Forbes attributed Akshay's position in the list to his several endorsement deals and multiple films, adding that he makes between $5 and $10 million (Rs 35-70 crore) per film. Actor Shah Rukh Khan dropped off the list last year while Salman Khan this year.

Earlier this year, Akshay Kumar was seen in Kesari while he is awaiting the release of Jagan Shakti- directed Mission Mangal in August, Good News in December and Housefull 4 in October.

Akshay Kumar also has big budget films such as Sooryavanshi with Rohit Shetty and Laxmmi Bomb, directed by Raghava Lawrence in the pipeline.