Twinkle Khanna indulged in some chess time and "the inevitable" happened. 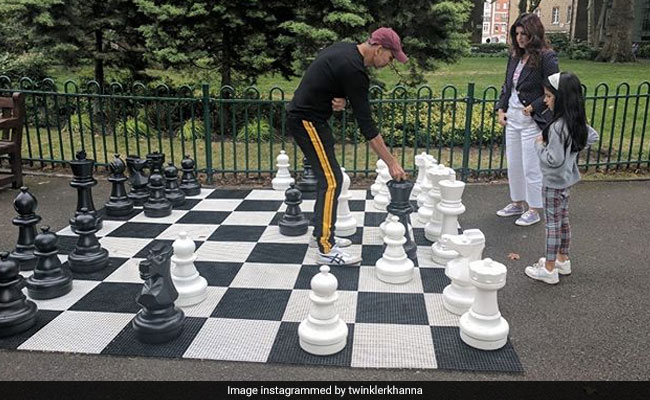 Twinkle Khanna, who will never let an opportunity to hilariously troll Akshay Kumar slip by, warmed up to her actor-husband in an Instagram post, which made our day. Twinkle, who is currently holidaying in London, took a walk around the London streets with Akshay and daughter Sitara. Twinkle and co. indulged in some chess time as they chanced upon a outsized chess board but as per Twinkle's narration, "the inevitable" happened. Here's how she captioned her post: "Unfortunately when you play any game with a certain Khiladiyon Ka Khiladi losing is rather inevitable. Chess time." In the photo, Akshay can be seen planning his next move with utmost concentration while Twinkle and Nitara stare on in what appears to be utter dismay. They know no matter how much they try, "the inevitable"'s going to happen, after all.

Akshay Kumar has headlined several films in the Khiladi series. Akshay famously featured with Rekha in Khiladiyon Ka Khiladi, which hit screens in 1996. However, Twinkle Khanna is a part International Khiladi as well - she co-starred with Akshay in the 1999 film.

Meanwhile, Twinkle Khanna has been filling up her Instagram with updates from London. One of her recent posts with her best friend fashion designer Bindya Lulla trended a great deal.

When this girl is around she brings chaos in her wake! #bestfriends

She also made a trip to the British Museum in London with son Aarav and described the back story in these words: "The tables have turned-This summer my son is the one wanting to go to museums instead of me having to drag him to one!"

The tables have turned-This summer my son is the one wanting to go to museums instead of me having to drag him to one! #mangaexhibition #discovernewthingseveryday #art

On the work front, Akshay Kumar will next be seen in Mission Mangal and also has films such as Housefull 4, Good News, Laxmmi Bomb and Sooryavanshi in the line-up. Twinkle Khanna is a best-selling author.