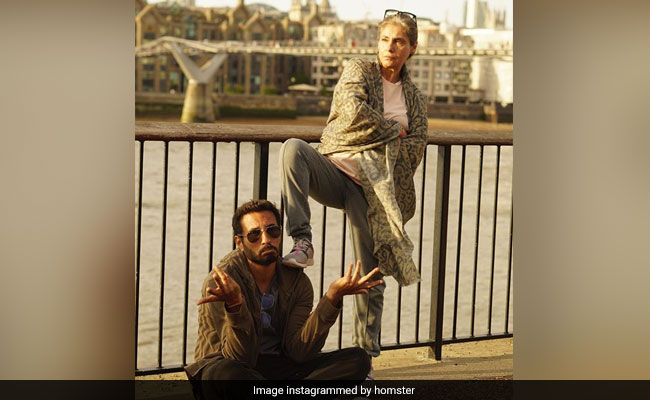 Sorry, Homi Adajania but Twinkle Khanna is busy chilling with son Aarav - may be she'll come to your rescue sometime. May be. Filmmaker Homi Adajania shared an update from the sets of his new film Angrezi Medium in London and called on for help, tagging Twinkle Khanna. Why he needed to be rescued can only be explained by the photo he Instagrammed - Twinkle Khanna's mom Dimple Kapadia is in Homi Adajania's film and is quite literally making her presence felt on sets in London. In the photo Instagrammed by Homi, Dimple can be seen resting her foot on his shoulder with a swagger expression on her face. She means business. "When the muse decides to abuse. Twinkle Khanna, help!" Homi captioned the photo.

Twinkle, who is also in London and is usually pretty active on social media, hasn't responded to Homi's post yet - something that can only be explained by her busy holiday schedule. She was spotted chilling with son Aarav on the stairs of the British Museum. Looks like she's also coping with how the "tables have turned this Summer" - "The tables have turned - This summer my son is the one wanting to go to museums instead of me having to drag him to one," read her post.

The tables have turned-This summer my son is the one wanting to go to museums instead of me having to drag him to one! #mangaexhibition #discovernewthingseveryday #art

TBH, Homi Adajania must be used to Dimple Kapadia's "whacky" ways. Angrezi Medium marks his fourth collaboration with Dimple. She's starred in all of his films so far - Being Cyrus, Cocktail and Finding Fanny. During the promotions of Finding Fanny, in an interview with NDTV in 2014, the director said: "Dimple is a whack job. She's definitely the whackiest. She's up to doing anything in front of the camera. Then suddenly I'll tell her to do some interviews and she'll say 'no, no, I'm very camera shy.' She's brilliant, she's such a sport and she always wants to push it. She's still like a 20-year-old."

Homi Adajania's Angrezi Medium stars Irrfan Khan and Kareena Kapoor in lead roles - it marks the 52-year-old actor's first film after he returned to India post his cancer treatment in London. Kareena plays a cop in the movie and this is what Homi Adajania posted on his Instagram story:

Angrezi Medium is a sequel of sorts to Hindi Medium, which released in 2017. It is expected to hit screens in April next year.