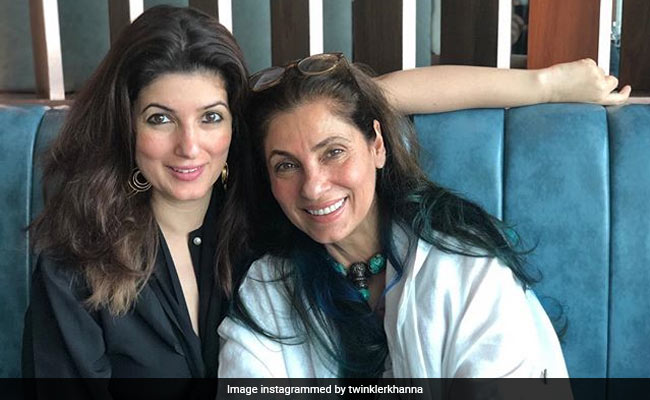 Actress Dimple Kapadia turned a year older today and on the occasion of her 63rd birthday, her family and her friends in Bollywood wished her with heartwarming messages. Among all the well-wishers, the one who made her birthday extra special was her daughter Twinkle Khanna, who shared a "goofy" video of Dimple and said that ageing makes her look "even better." Sharing a video of Dimple Kapadia made using paparazzi filter of Instagram, Twinkle wrote: "The birthday girl is shining bright! Mother turns a year older and looks even better." She accompanied her post with hashtags such as #thefabulousbirthdaygirl #goofingaround.

In the video, Dimple Kapadia can be seen styling her hair. Take a look:

Reacting to the birthday post, actress Sonali Bendre asked Twinkle to wish Dimple Kapadia a very happy birthday from her side too. That's not the only thing on her wishlist as she even asked Twinkle to give her mom a "big hug."

Earlier, Twinkle Khanna shared a throwback picture of herself with Dimple Kapadia, which actually was the cover of Super magazine dating back to September 1978. She captioned the adorable picture: "Why do I look like I want to punch the photographer in every childhood picture?" Twinkle has shared pictures with Dimple in the past also.

Here are her posts:

Why do I look like I want to punch the photographer in every childhood picture? #TheOriginalBossBaby

Not only Twinkle but Urmila Matondkar also wished the actress on her special occasion. Sharing a post for Dimple Kapadia, Urmila wrote: "Happy Birthday gorgeous. Beautiful are many but very few as genuine and lovely like you.. Stay as lovely warm and blessed always."

Happy Birthday Gorgeous beautiful are many but very few as genuine n lovely like you.. Stay as lovely warm and blessed always

A post shared by Urmila Matondkar (@urmilamatondkarofficial) on Jun 7, 2019 at 10:49pm PDT

Dimple Kapadia marked her presence in Bollywood with her debut film Bobby opposite Rishi Kapoor. She has worked in several hits like Ram Lakhan, Dil Chahta Hai, Aitbaar, Finding Nanny among others. The actress will star in Christopher Nolan's film titled Tenet.