"Be it making a home or launching a successful space mission, women know it all!" wrote Akshay Kumar 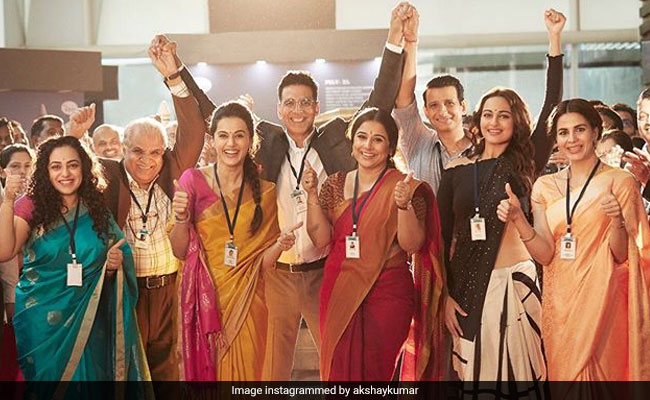 A new picture from the sets of Akshay Kumar-led Mission Mangal is trending on the Internet today. Wondering what makes it so special? The photo shows the cast, which includes Akshay Kumar, Vidya Balan, Taapsee Pannu, Sonakshi Sinha, Kirti Kulhari, Nithya Menen, donning their onscreen looks for their roles in Mission Mangal. Going by the post, we can say that Vidya, Sonakshi, Taapsee and Kirti have prepared for their roles as scientists perfectly. Akshay, who plays scientist Rakesh Dhawan in the film, shared the photo and wrote: "Be it making a home or launching a successful space mission, women know it all! Celebrating the power of women scientists: Mission Mangal is their story!" The film is based on Indian Space Research Organization (ISRO) scientists, who made the Mars Orbiter Mission (MOM) possible.

The same picture was shared by Vidya Balan, who plays the role of the scientist Tara Shinde, Taapsee Pannu, Sonakshi Sinha and Kirti Kulhari on their respective social media profiles. Vidya captioned the picture: "Jab jab koi bolega ki ladkiyaan scientist nahi ho sakti, tab tab #MissionMangal ki misaal di jaayegi. A big salute to the Mars brigade!" while Taapsee wrote: "Every dream, no matter how big or small, requires skill, knowledge and most importantly the courage to envision it. Presenting to you the brigade that stood tall in the face of all obstacles with grit and passion and gave life to #MissionMangal!"

Check out the aforementioned picture:

A few days ago, the teaser of Mission Mangal dropped on the Internet. In case you haven't watched it yet, take a look:

Mission Mangal, directed by Jagan Shakti and produced by Fox Star Studios, is slated to release on August 15. The film will clash with John Abraham's Batla House and Prabhas and Shraddha Kapoor's Saaho at the box office, which are releasing on the same date.