On 20 Years Of Her Debut Film Rehnaa Hai Terre Dil Mein, Dia Mirza Writes, "What An Amazing Journey This Has Been"

Dia Mirza described the journey as "20 years of pure love". 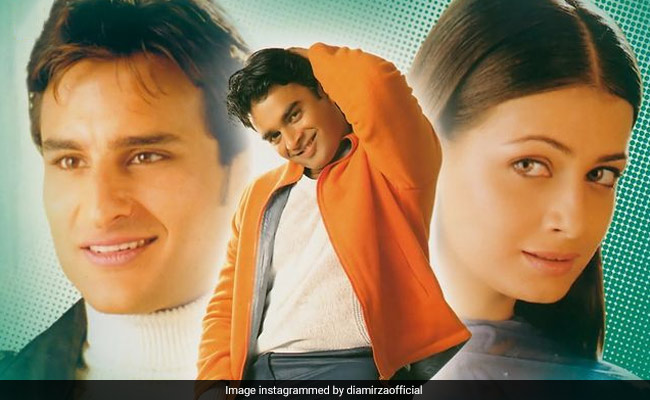 It has been 20 years since Dia Mirza, R Madhavan and Saif Ali Khan gave us a love story for the ages with Rehnaa Hai Terre Dil Mein. The film continues to be a favourite among fans thanks to its iconic soundtrack and inspired performances. Now, as the movie turns 20-years-old, Dia Mirza, who played the female lead in the film, has shared a post on Instagram revisiting the classic. Sharing a poster, Dia Mirza wrote, “20 years of pure love. It's been 20 years since my debut today. What an amazing journey this has been. Humbling, gratifying, challenging. I hope to continue to learn and grow as an artist.”

Thanking her fans for the continued love and support, Dia Mirza added, “Thank you all for your love and generosity. And a big thank you to Team Rehnaa Hai Terre Dil Mein.”

She also tagged her co-stars and director Gautham Vasudev Menon in the post. Fans inundated the comment section with praises for the cast and the film. 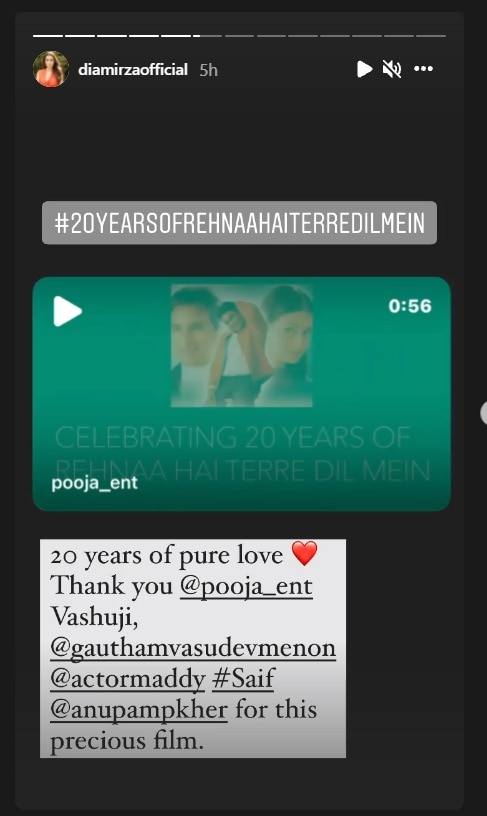 Dia Mirza's post, in turn, was reshared by R Madhavan. “I could not have put this better, my sweet lady…Thank you all so very much,” the actor wrote. Last year, rumours of a sequel to the hit film were doing the rounds on the Internet. Reacting to the news, R Madhavan said that he hoped that the rumours were true and the makers were coming back with an age-appropriate script for Dia Mirza and him.

In a tweet, R Madhavan said, “Guys, (I have) been reading rumours about the sequel (to RHTDM)...Fingers crossed and hoping it's true because I have no idea about this... Just praying that someone somewhere has an age-appropriate script for Dia and me."

Rehnaa Hai Terre Dil Mein is the remake of the Tamil film Minnale. Both films were directed by Gautham Vasudev Menon.