Oh, Nothing. Another Viral Pic Of Suhana Khan 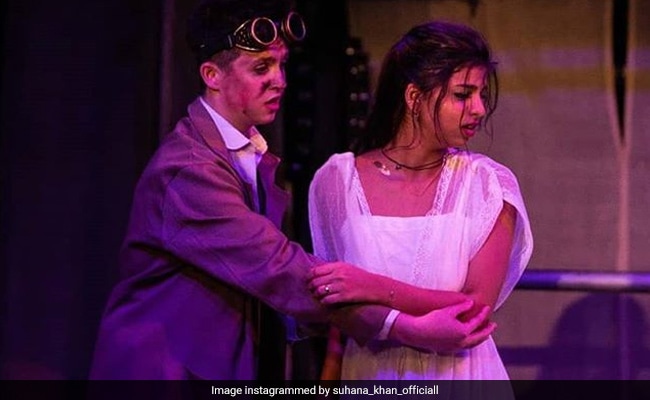 Suhana Khan standing next to a co-actor (Image courtesy suhana_khan_officiall )

Shah Rukh Khan's daughter Suhana found a spot on the list of trends on Friday after a picture of the star kid went viral. Fan clubs have curated a picture of Suhana from what appears to be a stage play in which she can be seen dressed in a white gown standing next to a fellow actor. Suhana, who is currently studying at London's Ardingly College, is keen to follow her father's footsteps and the photo which hit the Internet recently is proof. Suhana, who is now a familiar face at showbiz gatherings, has been in the spotlight since she showed up at the Lakme Fashion Week in 2017.

Last year, Shah Rukh Khan took some time off his busy schedule and flew off to London to watch his daughter's performance in a play, in which she was playing the role of Juliet. SRK was smitten by Suhana's act and dedicated a post to his daughter. After watching his daughter perform, the 53-year-old actor shared a heartfelt note which read: "With my Juliet in London. What a wonderful experience and exceptional performances by the whole cast. Congratulations to the whole team."

SRK's daughter made her debut on a magazine cover with Vogue's August issue last year. In her interview to Vogue, Suhana said, "I don't think there was any one moment when I decided. Since I was young, I'd do all these accents and impressions. But my parents only realised I was serious about acting when they saw a performance of mine for the first time. I was playing Miranda in a school performance of The Tempest."