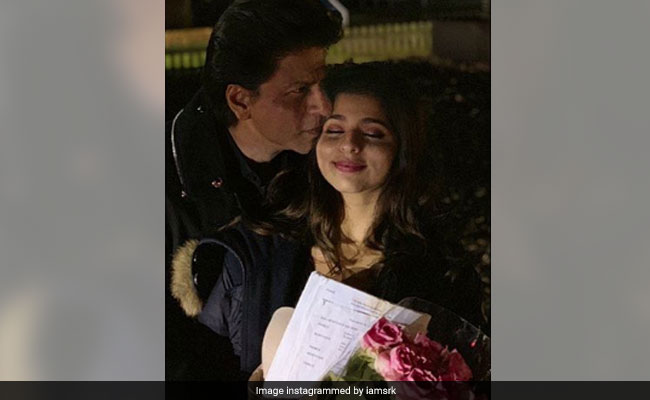 Shah Rukh Khan, who is gearing up for the release of his upcoming film Zero, took some time off his busy schedule and flew to London to visit his daughter Suhana, who is currently studying at London's Ardingly College. Shah Rukh Khan planned his trip in a way that he could watch his daughter's performance in a play, in which she was playing the role of Juliet. SRK was smitten by Suhana's act and his Instagram post dedicated to his daughter is proof. After watching his daughter perform, the 53-year-old actor shared a heartfelt note on his Instagram timeline which is sending the Internet into a meltdown. SRK juxtaposed a picture of himself with Suhana and a cut-out from the poster of the play featuring his daughter. "With my Juliet in London. What a wonderful experience and exceptional performances by the whole cast. Congratulations to the whole team," SRK captioned the photo. Impressed, Sushant's Instafam flooded the comments section with remarks like: "Beautiful," "Best father," and "amazing. The photo has over 388,934 likes in less than six hours.

Gauri Khan married Shah Rukh Khan in 1991. Suhana is Gauri and SRK's middle child. She is currently completing her final term at Ardingly College. Suhana often make appearances on Gauri and SRK's social media accounts. SRK's daughter made her debut on a magazine cover with Vogue's August issue. Suhana, who is now a familiar face at showbiz gatherings and blockbuster Diwali gatherings has been in the spotlight since she showed up at the Lakme Fashion Week last year. Suhana Khan is keen to pursue a career in film but only after finishing her studies.

Two many beautiful women..Too little time. Will be back NYC to savour their company & love again...soon.

Holidays as they say should really be given a speeding ticket...hate dropping my kids to the airport....when holidays end...

Often, the Internet curates fabulous pictures of Suhana and gives it the status of being crazy viral. Take a look at some of the photos shared by fan clubs.

Zero is all set to bring early Christmas vibes to theatres on December 21.

Natkhat: Vidya Balan Unveils The First Look Of Her First Ever Short Film