Nothing To See Here, Just A Pic Of Salman Khan And Rana Daggubbati 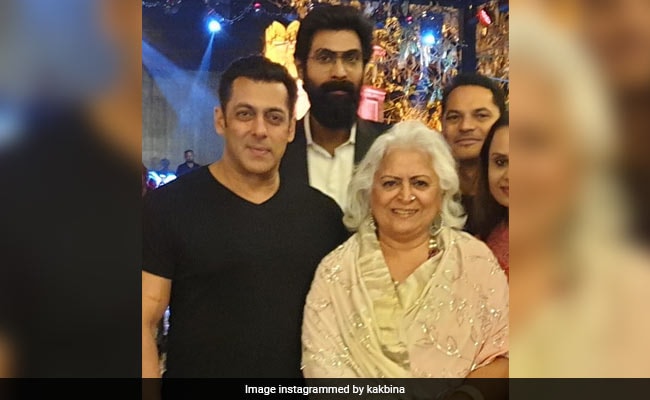 One doesn't need throwback Thursday to post a nice picture of Salman Khan and Rana Daggubati. Actress politician Bina Kak shared a photo of Salman Khan and Rana Daggubati from Venkatesh's daughter Aashritha's wedding, which was held in Jaipur in March this year. Rana Daggubati is Venkatesh's nephew while Salman Khan was one of the celebrity guests at the wedding. Bina Kak cropped out several people from the picture, which she originally shared in March - including father of the bride Venkatesh and Wizcraft co-owner Andre Timmins. Salman Khan and Bina Kak have co-starred in several films including Maine Pyaar Kyun Kiya and Salaam-E-Ishq. Bina Kak, former Tourism Minister of Rajasthan, is a close family friend of the Khans and Salman frequently visits her in Jaipur, where he recently filmed his upcoming film Dabangg 3.

But first, take a look at this picture of Salman Khan and Rana Daggubati:

And here the OG picture from the function in March:

Back to Salman Khan - the 53-year-old actor is currently filming Dabangg 3, part of which were recently shot in Jaipur. Salman Khan's cop drama is directed by PRabhu Deva, who last directed Salman Khan in Wanted (2007). The third film in the Dabangg series also features Sonakshi Sinha, Arbaaz Khan and south star Sudeep, who plays antagonist opposite Salman.