"I found it very difficult at a particular time because there was a shot when I needed to kick him on his chest very hard," said Kiccha Sudeep 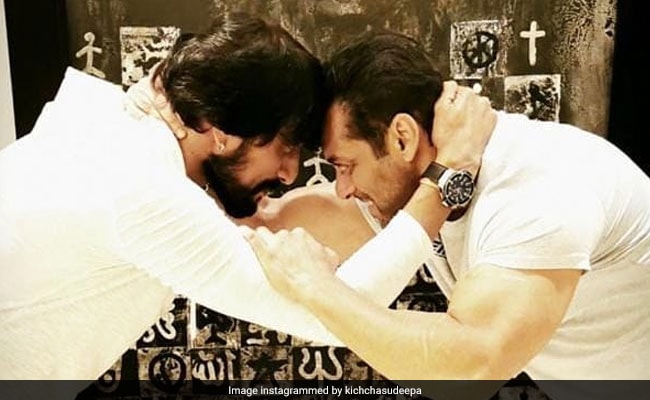 Salman Khan's Chulbul Pandey is pitched against south star Kiccha Sudeep's Sikander Bhardwaj in Dabangg 3. Sudeep may be Salman's nemesis on screen but his behind-the-scenes anecdotes are proof that he was intimidated by Salman Khan on sets. In an interview with Pinkvilla, Sudeep revealed how the makers had to alter an action sequence because he simply couldn't bring himself to kick Salman on the chest. "I found it very difficult at a particular time because there was a shot when I needed to kick him on his chest very hard. I tried, little and then Prabhu sir (director Prabhu Deva) comes to me and (gesturing action stunts)... he shows, doesn't say anything. Salman is also standing with full force. But I couldn't do it."

Elaborating on the story, Sudeep said he had Salman's full approval but still couldn't do it: "And then later, Salman tells me, 'Buddy, kick me'. I told Prabhu sir 'I can't kick him'. The respect that you have for some people... I can't sir. Then finally, they did it in a different way. I couldn't do it. I understood why people in the South found it difficult to kick me."

Stay tuned for a surprise.

Talking about his first day on sets, Kiccha Sudeep added: "When I went to the sets, I requested Prabhu sir the first day to not give me so many lines in Hindi. I was used to seeing a Salman Khan film from a distance, now suddenly, working with him, I did not know what these people were expecting off me. Prabhu Deva was very sweet to cancel the shoot and Arbaaz asked me to take my time. Salman Sir joined after three days, after that, the problem was not with him, it was with me. I was thinking too much."

Always knew this superstar. Dabangg introduced me to the human side of SK.

Directed by Prabhu Deva, the cast of Dabangg 3 also sees the return of Arbaaz Khan as Makkhi and Sonakshi Sinha as Rajjo. Pankaj Tripathi, Nawab Shah and Mahie Gill also star in the movie. Mahesh Manjrekar's daughter Saiee is making her Bollywood debut with the film. Vinod Khanna's brother Pramod Khanna has taken over the role of Chulbul Pandey's father Prajapati.