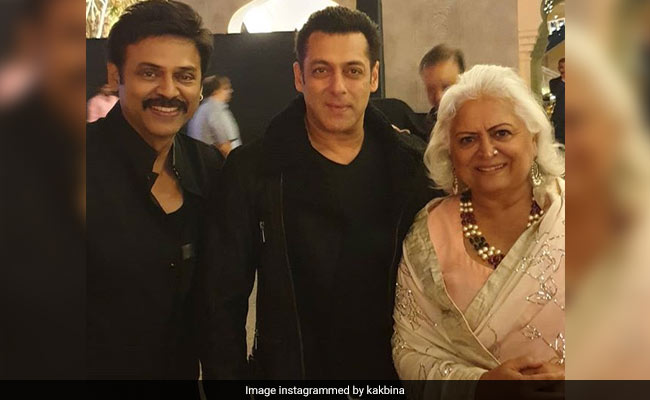 Bina Kak shared these photos on her Instagram (courtesy kakbina)

It appears that the wedding festivities of South star Venkatesh Daggubati's daughter Aashritha are underway in full swing over the weekend, which made Salman Khan find a spot on the list of trends. Did you know Salman Khan was part of the guest list? Veteran actress Bina Kak, who has co-starred with Salman Khan in films such as Maine Pyaar Kyun Kiya and God Tussi Great Ho, shared glimpses of the wedding festivities on Instagram Salman Khan stars in them. The families are strictly guarded about updates of the wedding with no official confirmation of Aashritha's wedding details being available but decoding Bina Kak's captions help suggest that it was indeed Aashritha's wedding functions that that the pictures are from. "Destination wedding, Jaipur, South comes here," she added in tags.

We also spotted the bride's first cousin actor Rana Daggubati (son of Suresh Babu) in one of the photos. In one of her posts, Bina Kak even congratulates Venkatesh Daggubati. Here's how much fun Salman Khan, Rana Daggubati and others had at the Jaipur wedding:

For one photo, Bina Kak also wrote: "Salman Khan at home! In Jaipur!"

With my favorite Kamaal ,kamaal khan

The wedding festivities are also said to have been attended by South stars Naga Chaitanya and his wife Samantha Ruth Prabhu. Naga Chaitanya is Aashritha's cousin. He Instagrammed a "couple goals" photo with Samantha earlier on Saturday. Take a look:

Aashritha reportedly got engaged to longtime boyfriend Vinayak Reddy in a close-knit ceremony on February 6 in the presence of their family members and close friends at Venkatesh Daggubati's home in Hyderabad. Aashritha Daggubati is a baker and food blogger. Her Infinity Platter has a massive following across various social media platforms, including Facebook and Instagram. Her fiance is the grandson of R Surender Reddy, the Chairman of Hyderabad Race Club.