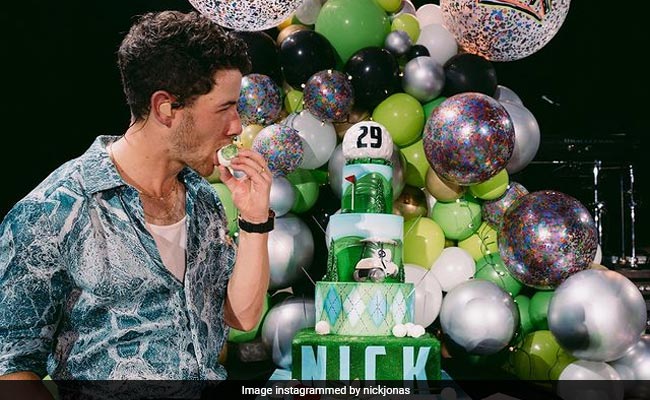 Nick Jonas received the best surprise from his wife Priyanka Chopra. She arranged a five-tier birthday cake at a Jonas Brothers concert, where he was performing. There were videos from the concert that were posted by fan accounts, in which there was a golf themed birthday cake along with an arrangement of balloons. Nick noticed an envelope that came with the birthday surprise. "Is it from wifey? Is she going to pop out of the cake?" Joe asked. Before taking a bite of the cake, Nick waited to see if Priyanka would pop out.

Priyanka couldn't attend the Jonas Brothers concert, but the actress especially flew from London for his 29th birthday. Sharing a picture from the birthday bash of the singer, Priyanka Chopra wrote a loved-up caption for him. "Love of my life. Here's wishing the kindest most compassionate loving person I know a very happy birthday. I love you baby...Thank you for being you." In the photo, Nick can be seen kissing Priyanka on the cheek, who looks stunning in a mustard outfit.

Priyanka Chopra has resumed work in UK. The actress, on Friday, posted a couple of selfies from the sets of Citadel with the caption, "When your hair is 90% of your selfie... #citadel #curlynaturalhair".

Priyanka Chopra was last seen in The White Tiger, in which she co-starred with Rajkummar Rao and Adarsh Gourav. The film was nominated in the Best Adapted Screenplay category for Oscars 2021 but Anthony Hopkins' The Father, competing in the same category, won the award. Her upcoming projects include Citadel, Text For You and Matrix 4.