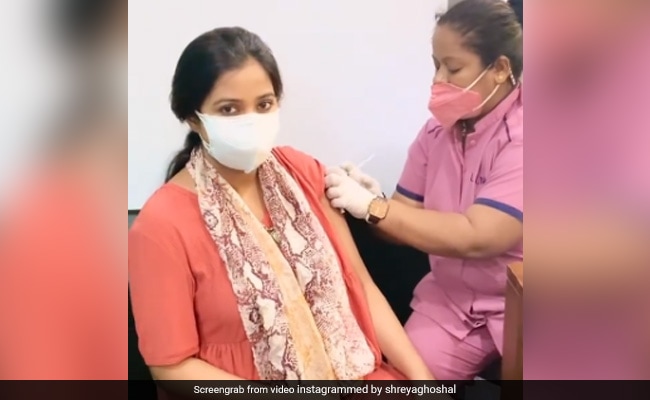 Shreya Ghoshal in a still from the video. (courtesy shreyaghoshal)

Singer Shreya Ghoshal and her husband Shiladitya Mukhopadhyaya got their first shot of the COVID-19 vaccine shot recently. New mom Shreya Ghoshal shared a video from the vaccination session and she revealed in her post that she got her shot while son Devyaan "was sleeping peacefully at home." Sharing the video on Instagram, she wrote: "While Devyaan was sleeping peacefully at home, I quickly went out to get my first dose of vaccination today! It's absolutely safe for new mothers to get vaccinated for COVID as recommended by my doctors. Just like anyone else, if you are a nursing mother, you too can get your shots."

Shreya Ghoshal  posted a picture with her husband Shiladitya Mukhopadhyaya, who also got vaccinated and she wrote: "Post vaccination grin." She added the hashtags #getvaccinated, #vaccinationdone, #covishield and #covidvaccine.

Shreya Ghoshal and her husband welcomed their first child, a baby boy, on May 22 and they named him Devyaan. Shreya Ghoshal married Shiladitya Mukhopadhyaya on February 5 in 2015. The duo dated for several years before getting married.

Shreya Ghoshal's discography clearly needs no introduction. She became super popular after she sang tracks for the 2002 hit film Devdas. She sang Silsila Ye Chaahat Ka, Bairi Piya, Chalak Chalak, Morey Piya, and Dola Re Dola in the film. She won the National Film Award, Filmfare Award for Best Female Playback Singer and Filmfare RD Burman Award for New Music Talent for these tracks. Shreya is also known for singing Piyu Bole from Parineeta, Jadu Hai Nasha Hai from Jism, Barso Re from Guru, Ooh La La from The Dirty Picture, Manwa Lage from Happy New Year and Ghar More Pardesiya from Kalank, among many others.