Neha Dhupia Posts Adorable Pic Of Angad Bedi With Daughter Mehr: 'So Much To Be Grateful For'

"Neha Dhupia, I should be saying that," commented Angad Bedi 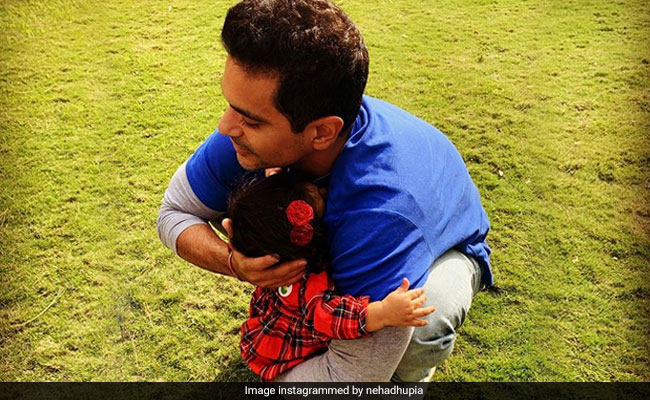 Seen Neha Dhupia's latest Instagram entry yet? The actress posted an adorable picture of her husband Angad Bedi and daughter Mehr and it will melt even the coldest of hearts. The photo features Mehr hugging her dad but her face is not visible in the picture. No doubt that Mehr's adorable red frock and her cute little hand around her dad will make you go aww. Reacting to the picture, Angad Bedi left a heartfelt comment for his wife and her daughter. He expressed his thoughts out loud and wrote: "Love you, baby. Neha Dhupia, I should be saying that."

So much to be grateful for

Neha Dhupia married Angad Bedi in a private ceremony in May last year. The couple welcomed their first child Mehr on November 18 the same year. A couple of days ago, the duo celebrated the first birthday of their daughter in Amritsar, where they also visited Angad Bedi's ancestral haveli. Pictures from their Amritsar trip feature Mehr's face (for the first time). The photos were originally shared by Angad Bedi's father Bishan Bedi. Posting the pictures, he wrote: "Bishan Bedi wrote: "Mehr seems to approve of her presence in the dilapidated 'haveli' of her great grandparents... Maybe the renovation of the old relic is around the corner! Thanks fellas for visiting my birth place." Take a look:

MEHR seems to approve of her presence in the dilapidated 'Haveli' of her Great GrandParents..Maybe the renovation of the Old Relic is around the corner..!! Thx Fellas for visiting my Birth Place..Guru MEHR Kareh..Love All Always..Hope U all left behind yur Youthful Energies..!! pic.twitter.com/LUUAiL5LxT

On the work front, Neha Dhupia is currently hosting radio show No Filter Neha. Angad Bedi, on the other hand, will next be seen in Sharan Sharma's Gunjan Saxena.